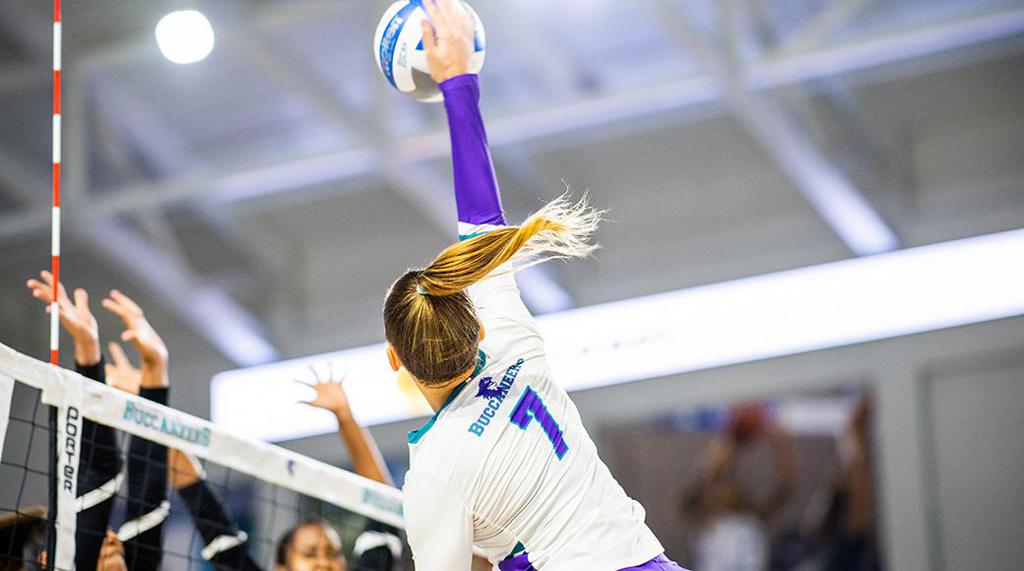 FORT PIERCE, Fla.- As long as Florida SouthWestern Head Coach Thais Baziquetto-Allen goes with the saying 'it's not how you start, it's how you finish', she will be pretty happy about her 4th ranked Bucs' Thursday night road sweep of Indian River. FSW got off to a slow start in the first and had to come back multiple times to win a 26-24 slugfest before getting things going in the second for a 25-19 win and finishing the night off with a clean 25-14 win in the third to complete the sweep and improve to 7-2 on the year.

The Bucs got off to a rough start in the first, making errors on three of the first four points of the game to stake Indian River out to an early lead.  Slowly they worked their way back into it and took a 10-9 lead on a service error by the Pioneers, but couldn't create any separation as FSW and Indian River went back and forth with the lead to a 17-17 tie.  Back to back aces for the home team put the Pioneers in front by four late in the set, but the Bucs roared back and evened the score at 23 on a kill from Barbara Koehler. A ball handling error on the Bucs gave Indian River a set point opportunity, but they fought it off to tie the score up and back to back kills from Julia Lawrenz flipped the script and gave FSW the first 26-24.

The Bucs got off to a much better start in the second, opening the set with a 7-3 lead, but they allowed Indian River back in midway through as the Pioneers cut their lead to just one at 12-11.  The Bucs pushed back ahead on a pair of kills from Koehler and were never threatened again, finishing the set strong to take it 25-19 and go ahead 2-0 in the match.

The third was all FSW.  An early 7-1 run pushed the Bucs out to a 10-4 lead and they never looked back. They opened their first double digit lead of the night at 18-8 on a block from Maria Cecilia and Deborah Ribero before putting the Pioneers out of their misery 25-14 to wrap up the sweep.

The Bucs hit .287 as a team in the win, getting nine kills each from Cecilia, Koehler, and Maria Petkova on the pins. Ribero and Lawrenz combined for 12 kills and just 2 errors on 25 attacks in the middle.  Fiona Baker led the Bucs with 23 assists in the win while Arianna Rossi paced the club with 14 digs.  Lawrenz was in on six of the Bucs nine blocks in the contest while Cecilia and Ribero each had three.

FSW improves to 7-2 on the year with the victory and ups their Suncoast Conference record to 2-0 while Indian River falls to 2-5 and 2-2 in conference play.

A busy week for the Bucs continues on Saturday when they once again hit the road, this time North bound for a date with State College of Florida in Bradenton.