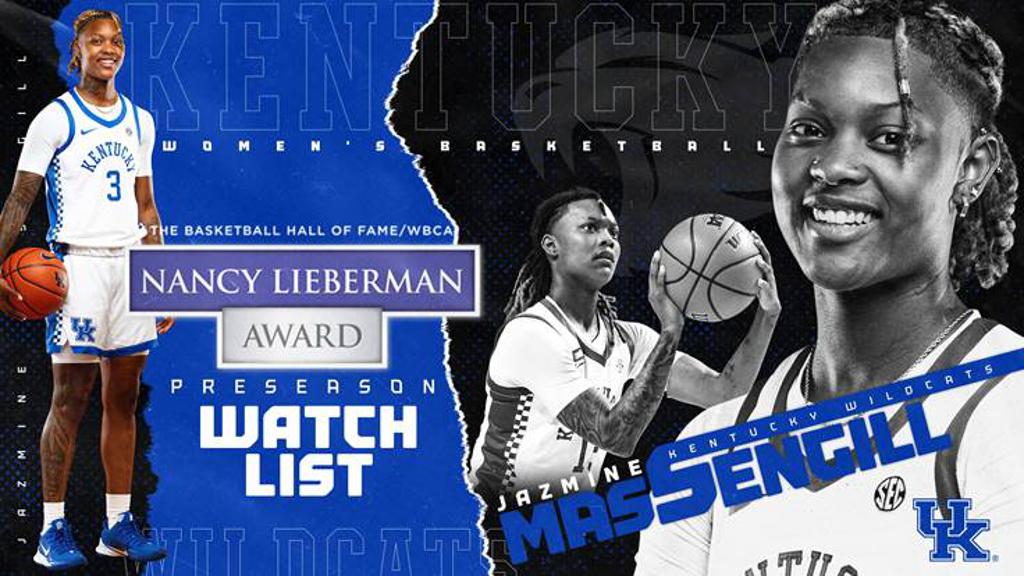 Ali Patberg Indiana
Patberg is a two-time Lieberman Award Top 10 finalist (2020 & 2021) and returns for her seventh and final season of college eligibility. Last season, the Columbus, Ind. native led the Hoosiers to a NCAA Elite Eight appearance where she averaged 14.0 points, 3.9 rebounds, 3.7 assists and held a +2.0 assist-to-turnover ratio. She was named an All-Big Ten second team honoree last season in addition to appearing on the Jersey Mikes Naismith Trophy top 50, Wade Trophy watchlist and Wooden Award watch list in 2021-22.

Jazmine Massengill Kentucky
Massengill will be looked at to lead the Wildcats from the point guard position this season. The native of Chattanooga, Tenn., is in her second season with Kentucky and played in 19 games last season with eight starts. The guard averaged 5.1 points and 3.3 assists per game with three or more assists in nine games. She led Kentucky in assists six times during the season.

Ashley Owusu Maryland
As a sophomore in the 2020-21 season, Owusu drove the nation’s top offense, which averaged 90.8 points per game, with 17.9 points and 5.9 assists per game. She steered the Terrapins’ offense, which led the nation in assist/turnover ratio (1.69).

Owusu scored in double figures in all 29 games for the Terrapins as they earned a record of 26-3 overall, 17-1 in Big Ten play and won the league regular season and tournament titles.

Myah Taylor Mississippi St.
Taylor, who was a finalist for the award last season, is coming off a career year in 2020-21 where she averaged a career-best 9.9 points per game, 3.0 rebounds and averaged 4.1 assists per game, which ranked fifth in the SEC a season ago. During her junior campaign, Taylor posted a 2.36 assist-to-turnover ratio, the fourth-best average in the SEC. Taylor recorded at least five assists in eight games in a shortened season while scoring in double-figures 11 different contests.

Anastasia Hayes Mississippi St.
Hayes, who enters her first season in Starkville, was one of the nation's most prolific scorer's last season, averaging 26.5 points per game, the second-best scoring average in America. She was named Conference-USA's Player of the Year while earning the second-straight First Team All-C-USA honor of her career. While leading Middle Tennessee to a 17-8 record, she averaged 5.1 assists and 2.8 rebounds per game. She ranked 13th national in steals (69) and 19th in assists (128) while leading all of Division I in free throws attempted (265) and free throws made (169). Hayes eclipsed the 30-point margin in six different games with a career-best 42-points against UAB on Jan. 30, 2021. In 2018, at Tennessee, Hayes was named the SEC's Sixth Woman of the Year.

Raina Perez NC State
Perez finished last season leading the ACC in assist-to-turnover ratio (2.62), with that number ranking 14th nationally. She tied the single-game program record for assists with 13 in the Pack's road game at UNC, one of 12 games in which she dished out at least five assists. Perez also scored in double figures on 12 occasions last season, and she most notably hit the game-winning jumper with 2.1 seconds left in the 2021 ACC Tournament title game.

Diamond Johnson NC State
Johnson joins the Wolfpack for the 2021-22 campaign after spending her freshman year at Rutgers. While with the Scarlet Knights, she was named to the Second Team All-Big Ten and the Big Ten All-Freshman Team. She averaged 17.6 points, 2.5 assists and 2.3 steals during her rookie campaign and compiled impressive shooting percentages of 51.2 percent from the floor, 45.5 percent from three-point range and 90.2 percent from the charity stripe.

Paige Bueckers UConn
Bueckers had a record-breaking rookie season in Storrs. In addition to the Lieberman Award, she was the first freshman to win the Wooden Award, Naismith Trophy and AP Player of the Year honors. She led the Huskies with 20.0 points and 5.8 assists per game and was named an AP, WBCA and USBWA All-American.