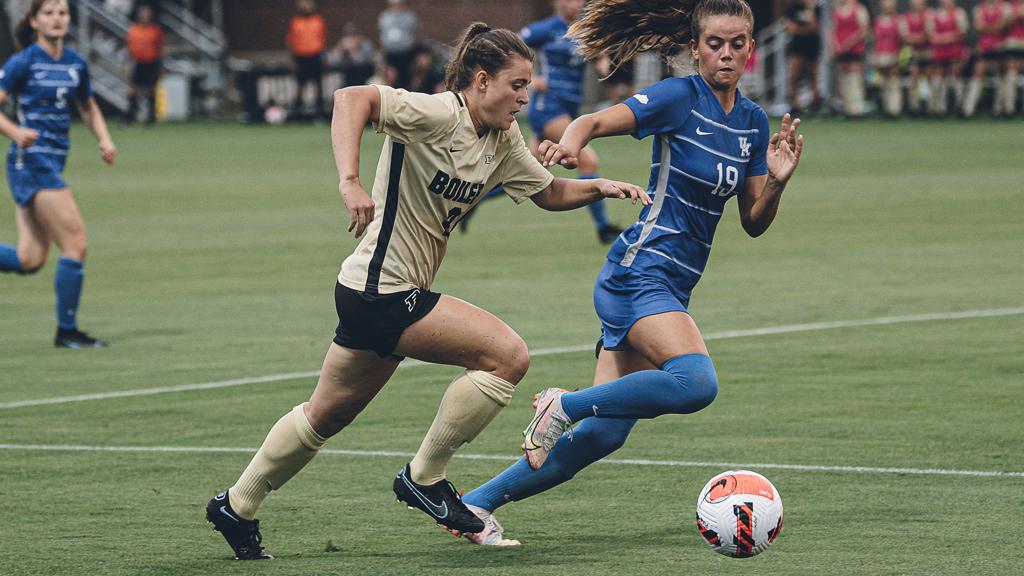 With the win, the Boilermakers (4-1-2) remain undefeated at home and have won four of their last five matches. Senior goalkeeper Marisa Bova and the defense turned in their second clean sheet of the year as the Wildcats (4-3-0) were shut out for the first time in their last six contests.

Mathews’ goal, the eventual game-winner, came in the 26th minute, and Dunaway added the insurance in the 83rd. Senior midfielder Aly Mielke assisted on Dunaway’s goal, which was her third of the season after she entered the year with two career assists.

As the Boilermakers held a 21-10 advantage in shots, they had eight shots on goal and held K-State to two. Purdue earned nine corner kicks and the Wildcats were limited to one. Kansas State’s goalkeeper made six saves.

Bova stopped both shots on goal she faced to earn her second shutout of the season. The 15th clean sheet of her career, she moves into sole possession of third place in program history for career shutouts. Bova passes Jenny Bradfisch, who had 14 shutouts from 2006-09, and in second place all-time is Jocelyn Cavalier, who had 19 from 1998-02.

Mathews had a match-high six shots, four on goal, while freshman forward Megan Hutchinson had three shots, two on goal.

Purdue’s first goal came at 25:29. Just outside the center circle, Mathews received the ball and immediately sent it past a Kansas State defender. She picked the ball back up just outside the penalty arc on the left side and dribbled twice into the 18-yard box. Mathews then beat the K-State keeper, who was outside of the penalty box, with a shot into the lower-left corner of the net.

"It's really an important goal for her, she's been knocking on the door of scoring,” Purdue coach Drew Roff said of Mathews’ goal. “She's been a real asset to us these last few games as a playmaker… It's great to see her get rewarded for all the hard work she's put in. Tonight she took it upon herself to score that very important early first-half goal and I think it's really going to be great for her confidence. I definitely look forward to her being that threat to score herself, as opposed to just creating for others.”

The Boilermakers added an insurance goal to make it 2-0 at 82:52 thanks to Dunaway. Mielke received the ball to the right of the center circle and sent a lateral pass to Dunaway on the near side of the field. Dunaway then dribbled towards the goal while angling to her right to the center of the field. From nearly 30 yards out, above the penalty arc, Dunaway sent a shot on net that bounced past a diving K-State goalkeeper and into the lower-left corner.

“It was fantastic,” Roff said of Dunaway’s goal. “We were controlling the game in the second half, but anytime it's only 1-0, you have to be aware of that one counter attack opportunity, so that second goal was huge… Gracie made a fantastic play. She'd been on the right side all night, we put her on the left side so she cut into her right... She decided to pull up from distance and have a go, and fortunately it was well-struck and great placement, and I'm really happy for her. She's obviously been a really dynamic presence here as a young player and I love to see her get rewarded for all the hard work that she's putting in as well.”

The home side had a 12-4 edge in shots, with a 4-0 advantage in shots on goal in the opening half. Purdue also had five corner kicks.

Three of Kansas State’s four shots came in the opening eight minutes, though all three were off target, one high and two that went to the right of goal. Mathews had Purdue’s first shot, which was saved in the 11th minute, and Hutchinson had a chance that was saved in the 13th.

Sophomore defender Nicole Kevdzija nearly made it 1-0 in the 20th minute with a shot that hit the crossbar following a corner kick, and K-State hit the right post 31 seconds later.

Mathews made it 1-0 in the 26th minute, and she had an opportunity to make it 2-0 in the 30th minute, but the chance was saved. The Boilermakers had four shots in the final 15 minutes, though three were wide and one was blocked. The defense did not allow a shot to end the half.

In the final 45 minutes, Purdue had a 9-6 edge in shots and four shots on goal to the Wildcats’ two. The Boilermakers earned four corner kicks and K-State had one.

Both teams had shots that went wide in the opening five minutes, and Hutchinson had the first shot on goal in the 60th minute, though it was saved. That ended a 5-1 advantage in shots in the first 15 minutes for the Old Gold and Black.

Following a save on a shot by Mathews in the 72nd minute, Kansas State had a shot blocked in the 74th. The defense then prevented another opportunity on a cross through the box.

The Wildcat keeper made a great save in the 76th minute to tip the ball out of play and save a goal by freshman midfielder Abigail Roy. Three minutes later, Bova made an equally-impressive save of her own, as she tipped a shot out to set up a corner kick. Almost two minutes later, she made another save to preserve the shutout.

Dunaway’s goal in the 83rd minute ended up being the final shot for either team in the contest.

Up next, the non-conference slate concludes on Sunday, September 12, against Colorado. Kickoff at Folk Field is set for 1 p.m. ET, and admission is free for all fans at every regular-season home match in 2021.