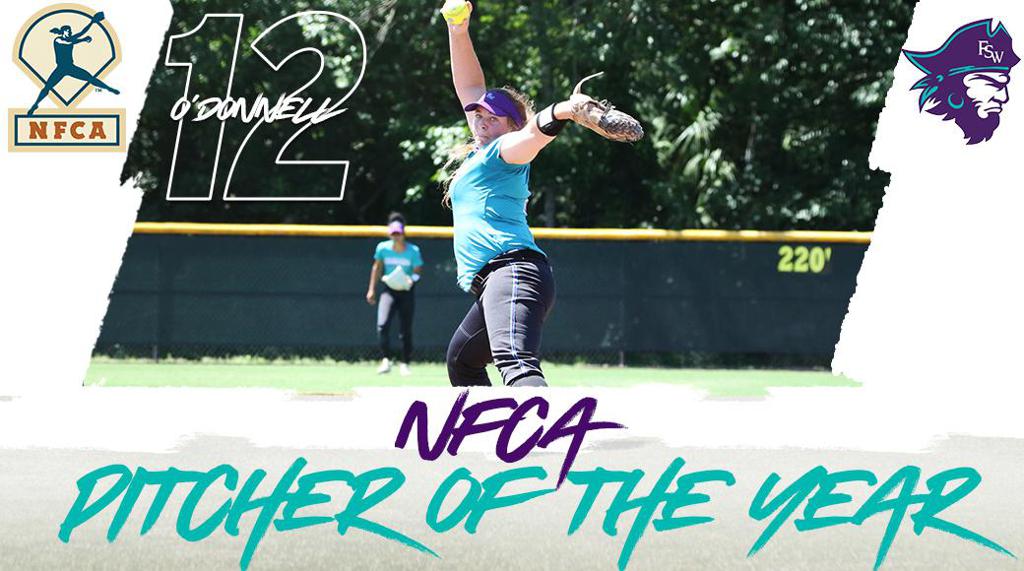 On the heels of leading her team to the 2021 NJCAA National Championship, Florida SouthWestern State pitcher Alyssa O’Donnell has been named the 2021 Schutt Sports/NFCA NJCAA Division I Pitcher of the Year.

O’Donnell adds to an impressive list of accolades that already included FCSAA State Pitcher of the Year, Suncoast Conference Pitcher of the Year, 1st Team All-State, 1st Team All-Conference, and NJCAA National Tournament All-Tournament Team.  The Bucs freshman put together an incredible stat line in 2021, going 23-1 with a 1.67 ERA while striking out 118 in 138 2/3 innings pitched.  Her .958 winning percentage this season in the circle was second best in the NJCAA Division I ranks while her 1.67 ERA also ranked second among pitchers with more than 20 wins on the year.  O’Donnell started 9 of the Bucs’ 10 postseason games in route to their first National Championship in program history, including all five games at the NJCAA National Tournament.  She finished the postseason an unblemished 5-0 with a 1.76 ERA while squaring off against six teams ranked in the top 15 of the NJCAA National Rankings.

Speaking upon his ace being bestowed the honors of National Pitcher of the Year, FSW Head Coach Robert Iamurri said “We are obviously very proud of Alyssa for earning this award. She took the ball for us in the biggest games of the year and always put us in a position to win. Going from a player who started just four games for us last year, to someone who threw a complete game without allowing an earned run in the National Championship game, shows the work and dedication that she put in to get to where she is at.”

She is the third Buccaneer in just five years to earn the distinguished honor of being named the National Pitcher of the Year joining Courtney Gettins (2016) and Kelsi Collins (2019).

O’Donnell has signed to play at Long Island University next season.