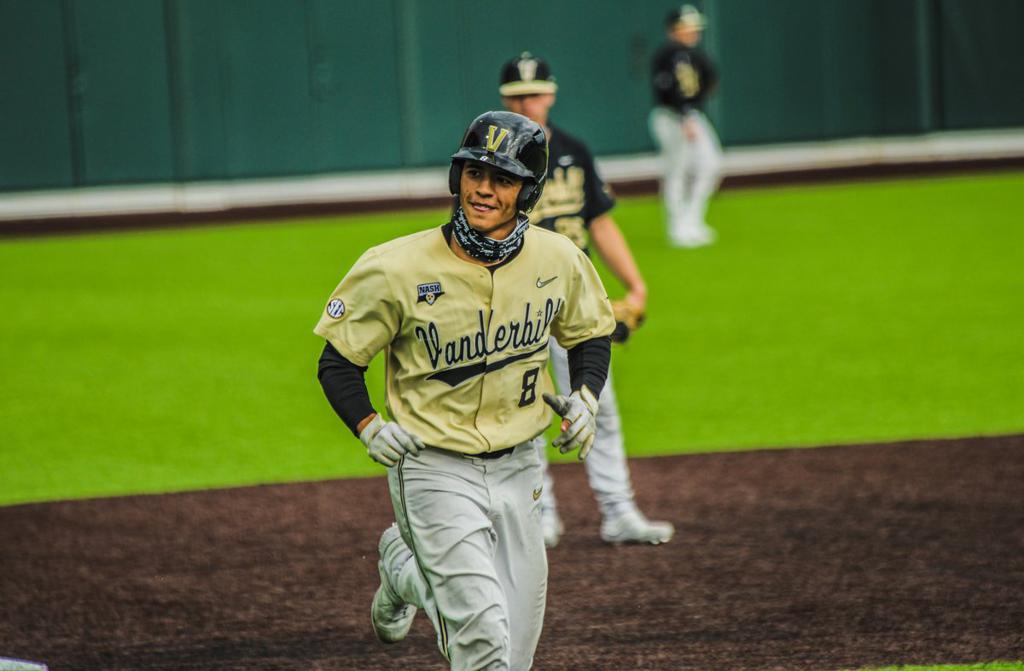 Some start their morning with coffee. Isaiah Thomas starts his with a grand slam.#VandyBoys | #RoadToOmaha pic.twitter.com/zpJ7tccTmx

NASHVILLE, Tenn. — Vanderbilt is a Regional champion once again – and this time around it has Isaiah Thomas to thank.

The junior outfielder hit a grand slam with one out in the 11th inning Monday morning at Hawkins Field and the Commodores (43-15) advanced to the Super Regionals with an 14-11 win over Georgia Tech.

Vanderbilt will next host East Carolina (44-15) next week in a three-game Super Regional series. Game dates and times will be announced soon.

In a 9-9 game in the 11th, Jack Bulger led off the 11th with a screaming line drive off the leg of Georgia Tech pitcher Josiah Siegel. John Medich entered the game and promptly walked Dominic Keegan.

CJ Rodriguez came up looking to drop a sacrifice bunt, but a wild pitch moved the runners up for him. The sophomore catcher wound up walking on a 3-2 count.

In came Sam Crawford (3-5) and, after a strikeout, Thomas filled up the count before unleashing his rocket of a grand slam down the left-field line. Thomas rounded third with hop and a skip and leap in front of the Vandy dugout before stomping on home plate.

“I wasn’t trying to do much, there’s no place to put me, I knew all I had to do was touch the ball – there was less than two outs. I was just trying to stay within myself, put a good swing on the ball, get a ball I could hit and that’s what happened,” Thomas said. “Once I got two strikes I kind of just had to react to anything and I got my pitch with two strikes and I put a good swing on it.”

Jayson Gonzalez added some insurance with an RBI double to right later in the inning. That proved critical as well as Kevin Parada hit a two-run home run off Ethan Smith in the bottom half – but it was too little too late for the Yellow Jackets (31-25). Nick Maldonado got the 33rd and final out with a runner on first at 1:10 a.m.

“It’s very emotional for the kids. It’s very emotional for everyone,” Vanderbilt head coach Tim Corbin said. “There’s so may ups and downs to it. But if you play a game like that and you play another game like that you’ve been there before. The thing about being a good baseball team is going through a lot of different experiences that you haven’t faced. This one was so unique in so many different ways.

“They counterpunched several times throughout the game. There was what, four or five different lead changes? Those are tough to play.”

The back-and-forth ending was predicated by a few eventful late innings.

Down 8-7 to start the eighth, Gonzalez absolutely crushed a solo home run left of center tying the game. Two outs later Keegan stepped into the box and waited two pitches before launching his 14th home run of the season into a frenzy of a crowd in left-center field.

Luke Murphy (3-1) came in and got two strikeouts and a groundout in the bottom of the eighth. The junior right-hander then got two harmless fly outs to center and Vanderbilt appeared on the verge of victory before Drew Compton stepped in.

Compton, on an 0-1 pitch, lifted a fly ball to left which carried and carried and carried some more until it cleared the V between the light pole and green monster. That sent the game to extra innings and delayed the home team’s celebration by a couple hours.

“It speaks to the nature of our team. We never give up,” Thomas said of Vandy’s ability to come back to win. “There’s innings left, there’s always a chance for us. That’s kind of how we’ve rolled all season long. This is just going to roll over to next week. We just never quit and that’s just who we are.”

The late-game dramatics took place long before the visitors stole the show early.

Bulger lifted a fly ball to right after that, a ball which turned into a sacrifice fly making it 1-0 Commodores.

But with two outs in the first, Vandy starter Patrick Reilly walked the bases loaded in front of former Vanderbilt outfielder Justyn-Henry Malloy. Malloy worked a 3-1 count and then ripped a two-run single to right giving the Yellow Jackets a 2-1 lead.

Stephen Reid added to the lead with a solid single to center making it 3-1.

Bradfield, in the third, coaxed a one-out walk before stealing second and third. Keegan let Bradfield walk home with a double to left center that cut the Vandy deficit to 3-2.

Troy LaNeve then quickly erased the deficit completely with a monster home run to right center.

After a Parker Noland base hit, Georgia Tech reliever Luke Bartnicki gave up a stolen base to Noland and then a walk to Gonzalez. Bradfield preceded to rip a double into the left-field corner making it 5-3.

Keegan and Rodriguez kept the pressure on in the fifth with back-to-back walks to start the inning. LaNeve roped an RBI single to right pushing the Vandy lead to 6-3. Georgia Tech went to the bullpen again, but Thomas greeted Zach Maxwell with a first-pitch, RBI single to left making it 7-3.

Luke Waddell got one of those runs back in the fifth with a solo shot to right making it 7-4. Later in the inning with two outs, Andrew Jenkins hit a deep fly ball to right center that Thomas had a beat on and had a glove on, but the ball popped out allowing a run to score making it a 7-5 game.

That play proved costly as Vandy reliever Chris McElvain entered and gave up a walk and a three-run home run to Reid to put the Yellow Jackets up 8-7.

Those events set up a wild final four innings.

“You have to be gritty. You have to be tough. You have to play forward. You have to be responsive. The game’s just difficult,” Corbin said. “You get to this point, everyone is good. There’s a lot of resistance by the opponent. You play games like that, that’s another layer of skin that you haven’t developed yet.

Reilly went 4 2/3 innings and was touched up for six runs, although only four were earned. He struck out six, walked three, allowed four hits and a hit a batter during a 98-pitch outing.

McElvain threw 2 1/3 innings and was charged two earned runs. He fanned six and battled through three hits and a walk.

The Regional title for Vanderbilt was its 10th and fourth in as many chances.

In a game with six lead changes, Vanderbilt prevailed over Georgia Tech in the wee hours Monday thanks to an 11th-inning grand slam by Isaiah Thomas pic.twitter.com/x1GKsdTJQh