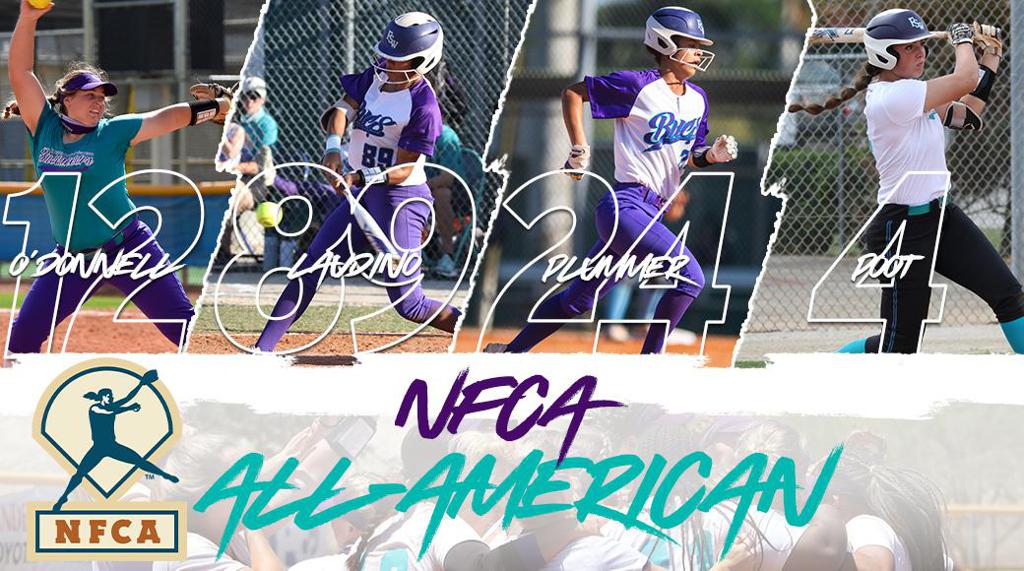 O’Donnell, Laudino, and Plummer were all named 1st Team All-Americans, also the second straight season for FSW to have three first teamers.

O’Donnell was named the NFCA National Pitcher of the Year after posting a 23-1 record in 26 starts, notching a 1.67 ERA in 138 2/3 innings pitched.  Her .958 winning percentage this season was second best in the NJCAA Division I ranks while her 1.67 ERA also ranked second among pitchers with more than 20 wins on the year.  O'Donnell started 9 of the Bucs' 10 postseason games in route to their first National Championship in program history, including all five games at the NJCAA National Tournament.  She finished the postseason an unblemished 5-0 with a 1.76 ERA while squaring off against six teams ranked in the top 15 of the National Rankings. She will play next season at Long Island University.

Laudino earned 1st Team honors for the second straight season. She led the team with 79 hits and 33 stolen bases on the year while hitting .485 and reaching base at a cool .517 clip. Laudino had hits in 40 of the Bucs final 43 games of the season including five multi-hit games during the 2021 postseason.  She finishes her FSW career as the all-time hits and runs leader with 218 and 182 respectively while hitting .512 in her time in Fort Myers, also a program best.  She will play next season at the University of Louisiana-Lafayette.

The third 1st Team honoree for the Bucs was outfielder Janessa Plummer. Plummer had a breakout campaign for the Bucs in 2021, finishing fourth in the NJCAA with an eye-popping .543 batting average. Opponents couldn’t keep Plummer off the sacks this season as she hit in 38 of 48 games including all 10 games of the postseason. She had 21 multi-hit games on the season including three at the NJCAA National Tournament, hitting an even .600 and scoring seven runs in the Bucs’ Championship march to earn Most Valuable Player honors.

Earning 2nd Team All-American honors was third baseman Feline Poot.  Poot was the Suncoast Conference Player of the Year this season, hitting .399 with a team best 17 home runs and 58 RBIs on the season.  Poot had 18 multi-hit games on the year and had 15 games with two or more RBIs.  She had five multi-hit games during the 2021 postseason and recorded extra base hits in six of the Bucs’ 10 postseason tilts.

The Bucs’ four All-American selections were most of any team in the country.  Three other teams landed three on the NFCA list.