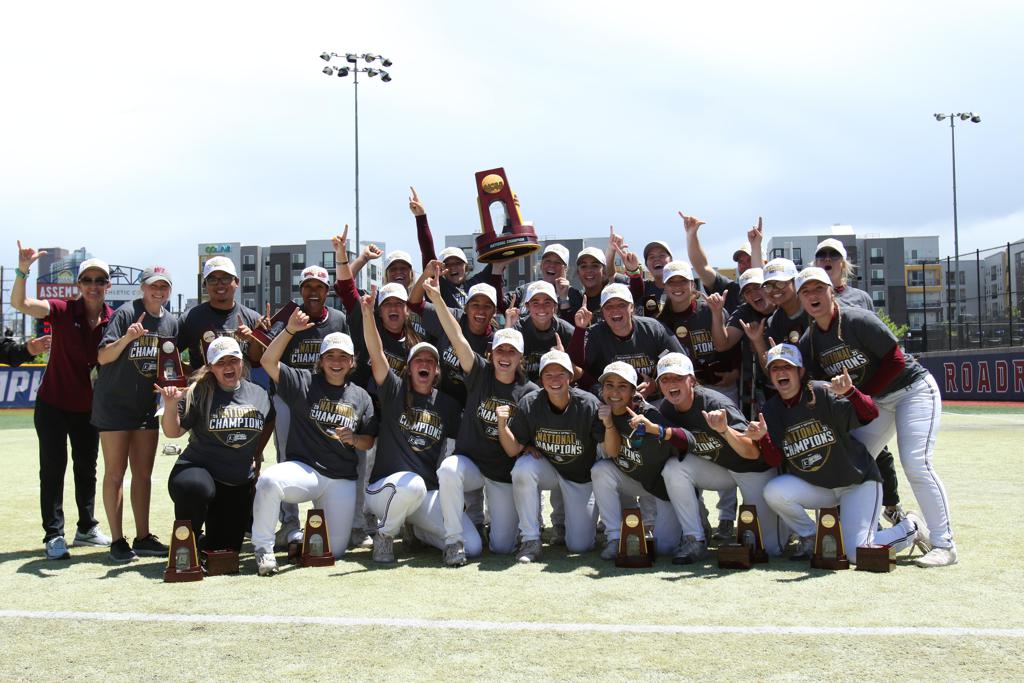 Freshman Gabby Valforte’s grand slam wins the national championship for No. 6 seed West Texas A&M for the first time since 2014.

Biola drew first blood, and despite it coming at the top of the fifth inning, it felt like that was when the game really began. Kayla Neff crossed home plate with her hands raised and eyes watery, adding a third home run to her stat line from the playoff series.

It felt like the energy changed, like Biola had an edge on the game, not just on the scoreboard but mentality wise as well. But that didn’t last very long.

The Lady Buffs didn’t let a home run knock their confidence, and instead capitalized on the pressure of the moment. It was the freshman who stepped up and won the game for her team.

Bottom of the sixth, down 1-0. Shanna McBroom singled, Erica Vessels was hit by a pitch and Alyx Cordell walked. Bases loaded. Quiet crowd. Freshman Gabby Valforte drilled a hit down center field, her teammates sprinted home as the roars erupted and echoed through the stands.

Valforte noticed that all three of her teammates on the bases were seniors, and she knew it was her job to help send them home.

“Seeing all of my seniors that pushed me so hard this season on all of the bases, I knew I had to do it for them and the team. In that moment I knew they had my back no matter what happened, and I was just going to do what I could to succeed,” Valforte said.

She looked each one in the eye and thought “here we go.”

“I knew she was going to do something special at that moment,” head coach Michael Mook said of his freshman’s big hit.

In the entire tournament run, the Lady Buffs only lost two games. They fly home from Denver, Colorado as Lone Star conference champions, South Central regional champions, and now national champions. This is only Mook’s second year with the program, and he finishes off the year with hardware to bring back to Texas.

How we got here

After Biola took game one of the championship series, the pressure was on West Texas to keep its chances alive. After a rain delay and a shutout in game one from the Eagles in their 5-0 win, the Lady Buffs needed a push of momentum throughout game two.

Biola’s game one performance was dominant, and a simple matter of getting at least one hit throughout four innings. According to Mook, the Eagles were just hitting the ball where the Lady Buff’s weren’t at.

45 minutes in between game one and two were spent talking about what went wrong in game one, and what adjustments to make. It wasn’t a motivational speech from Mook or a big pressure talk, just a conversation about how to improve the second time around.

The Lady Buffs delivered, and came alive in the fourth inning to force a game three on Tuesday.

West Texas was down 2-1, runners on the corners. Freshman Sydney Greeson stepped up to the plate literally and figuratively. A blast from Greeson landed behind the wall in left field, with a homerun in the stat book for her, and a 4-2 lead for her team. McBroom followed with a two run home run to stretch the score to 6-2. One more in the fifth put the lead to 7, and only two runs for the Eagles put the final at 7-4 in West Texas’s favor.