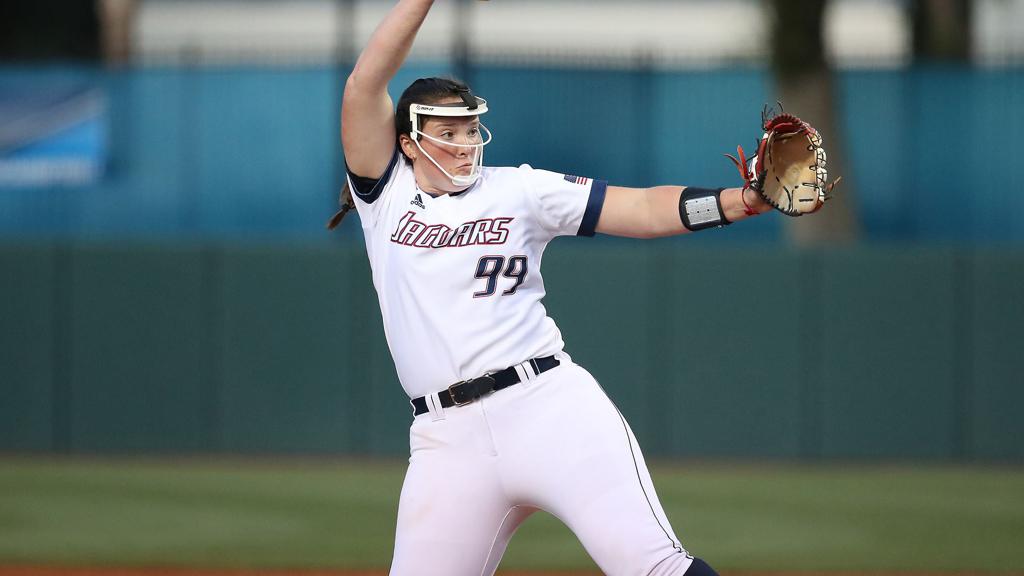 GAINESVILLE, Fla. – The University of South Alabama softball team saw it's postseason run come to an end Saturday as the Jaguars dropped a pair of games, falling to (1) Florida, 10-0 and (4) South Florida, 1-0 at the Gainesville Regional held at Katie Seashole Pressly Stadium.

The fourth-ranked Gators received a complete-game effort from Natalie Lugo as she allowed just two hits and a pair of walks, while striking out 11 in game one of the day.

Olivia Lackie tossed a three-hitter in the nightcap, but South Florida's Josie Foreman's solo home run in the top of the second proved to be the difference.

GAME FACTS
- Florida took the early lead with a pair of runs on one hit in the top of the first. Hannah Adams walked to lead off the game and Emily Wilke was hit by a pitch to put a pair of runners on base for the Gators. Julia Cottrill earned the second walk of the inning for UF to load the bases after working the count full. Florida broke the scoreless tie on the next at-bat as Jaimie Hoover reached on an infield single that plated a pair of runs (0-2).
- Echols led off the top of the third with a solo home run to right – her 15th of the spring – to give the Gators a 3-0 advantage.
- Caroline Nichols recorded the first hit of the afternoon for the Jaguars with a two-out single back up the middle – ending a streak of eight-straight retired batters by Lugo, including five-straight strikeouts. Nichols then moved into scoring position with her 13th stolen base of the season, but the Gator right-hander was able to get a fly out to right to end the inning.
- In Florida's half of the fifth, Echols lined a one-out double – her second extra-base hit of the contest – and Kendyl Lindaman reached on an infield single to put runners at the corners. After a fielder's choice cut down Echols at the plate, Hoover walked to load the bases with two away. Baylee Goodard then drew a five-pitch walk to score a run and extend UF's lead to 4-0.
- Abby Krzywiecki became the second base runner for the Jags as she drew a leadoff walk to start the bottom half of the fifth, but Lugo retired the next three.
- Cheyenne Lindsey led off the sixth with an infield single and then stole her 13th base of the season to move into scoring position. Adams dropped in a single in shallow center to put runners at the corners. Wilke recorded the Gators' third-straight base hit of the inning with a single to left to score Lindsey and make it 5-0 in favor of the tourney host. Echols then drove in her second run of the afternoon with a sac fly to foul territory in left for UF's sixth run of the game. Cottrill drove in the third run of the inning as she bounced a single back up the middle to score a Gator runner from second (0-7).
- Nichols reached for the second time with a leadoff walk to start the Jaguar sixth with a nine-pitch at-bat, and moved to third after a pair of groundouts, but Lugo kept the Jags off the board with a fly out to left.
- Goodard walked to begin the seventh and Sarah Longley put runners at the corners as she lined a single to right with nobody out. Goodard then came home to score the eighth run of the contest for UF on Lindsey's RBI ground out. With two outs, Wilkie dropped a double just inside the left field foul line to put runners at second and third. Echols then walked to load the bases – reaching for the third time in the game, and Lindaman made it 10-0 Gators with a two-run single to right.

NOTES
- Saturday's meeting marks the first time South has faced the Gators in postseason, but the seventh time that the Jaguars have faced a team from the Southeastern Conference in an NCAA Regional.
- The game against the fourth-ranked Gators marked the 13th versus a ranked opponent this season, marking for third most in a season. USA faced 14 ranked opponents during both the 2018 and 2014 seasons.
- With her start in the circle, Lackie made her 41st appearance of the season, moving her into a tie for ninth all-time in the category.
- The 10 runs scored by the Gators are the most recorded by a Jaguar opponent in a NCAA Regional game.
- With her seventh-inning single, Abby Allen extended her hit streak to four. She has also reached base safely in each of her last six outings.
- South Alabama had just four base runners in the contest with Nichols recording two of those spots with a base hit and a walk.
All nine starters had at least one hit or scored a run, and the 1-4 hole hitters combined to record seven of UF's 11 hits, scored six runs and drove in five.
- Echols was 2-for-3 with a walk, a run scored and two RBI, while Lindaman also had a pair of hits and drove in two runs. Adams scored three times and Wilkie was 2-for-4 with two runs scored and a RBI.
- In addition to her 11 strikeouts, Lugo also recorded seven ground ball outs and just three fly ball outs.

GAME FACTS
- South Florida struck first as Josie Foreman homered over the wall in left with two away in the top of the second, putting the Bulls up 1-0.
- South Alabama looked as if it might get a rally going in its half of the fourth. Nichols led off the inning and broke up the no-hit bid by Corrick with an infield single. The Jag leftfielder then moved up to second when Mackenzie Brasher reached on a USF error while sacrificing the runner over as the throw pulled the first baseman off the bag. However, Corrick retired the next three Jaguar batters – two coming via a strikeout including one to end the inning – and work out of the jam.
- Keel led off the bottom half of the sixth with an infield single to put the tying run aboard, and Nichols reached on an infield single to put the potential go-ahead run on base. With two away, Abby Allen was hit by a pitch to load the bases, but Corrick was able to get ground out to first to maintain the one-run advantage for the Bulls.
- Corrick pitched her fifth 1-2-3 inning in the bottom of the seventh and recorded her 13th strikeout to end the game.

NOTES
- The elimination game meeting marked the first in the all-time series between the two clubs and the first postseason meeting by the Jaguars versus an opponent from the American Athletic Conference. It was the 12th overall versus the league.
- With her sixth-inning strikeout, Lackie became just the fifth Jaguar pitcher to record 250 strikeouts for her career.
- The Walker, La., native joined former Jags Devin Brown (932 - 2015-18), Beth Pilgrim (735 – 2007-10), Hannah Campbell (666 – 2011-14), Farish Beard (606 – 2012-15) and Lackie (250 – 2021). She already holds the second-most strikeouts in a season in program history.
- The start marked the 26th of the season for Lackie, tying for ninth on the career charts with former Jags Linden Jones (2007) and Amanda Leggett (2007-08). The 26 starts in the circle are also the most by a freshman at South Alabama.
- Nichols recorded two of South Alabama's three hits, marking her ninth multi-hit game of the season.
- With the win, South Florida advances to the Regional Championship game versus top-seeded Florida.