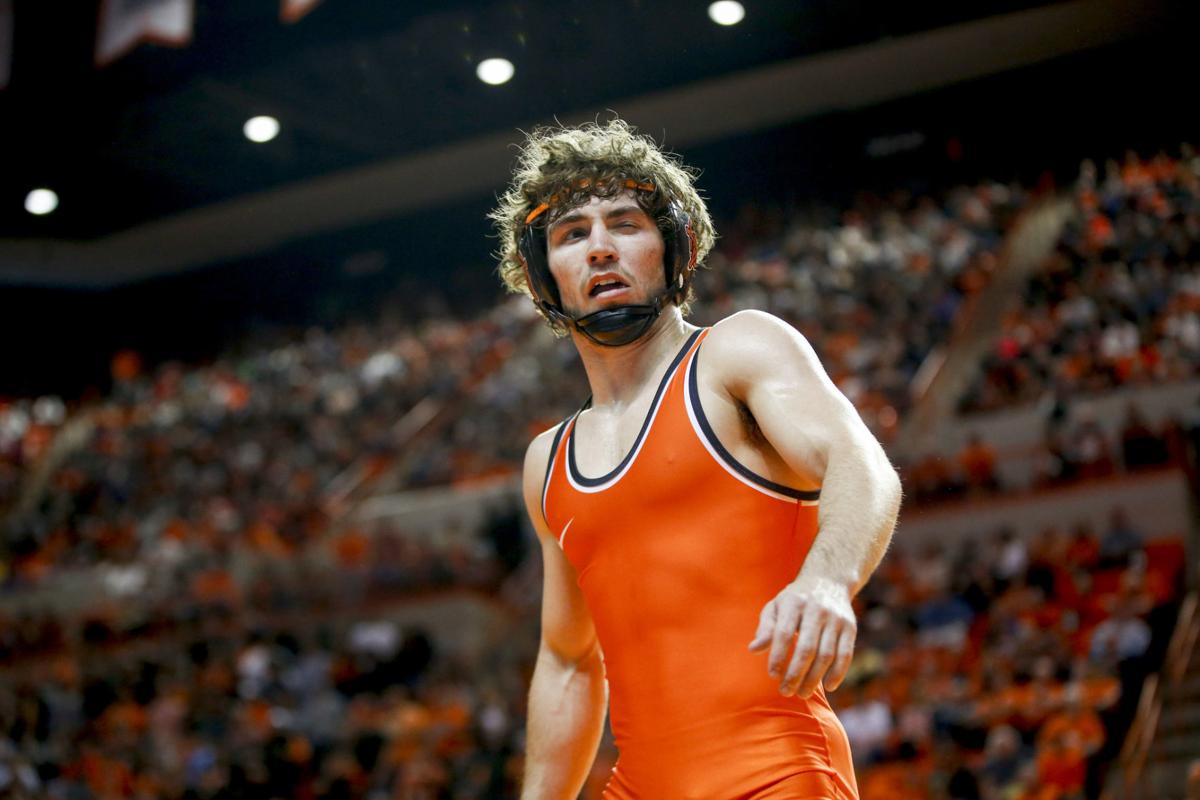 Wyoming @WyoWrestl #LCT
After a historic perfomance at the Big 12 Championships the Cowboys will now wrap up thier season with the NCAA Championships in St. Louis March 18-20. A program record tying seven Cowboys have earned their spot at the NCAA Championships with five pokes earning automatic bids and two more getting at large bids. For Chase Zollmann (141) and Cole Moody (165) it will be their first NCAA tournament appearance.

The Cowboys posted a record of 3-3 in duals during the regualr season knotching noteable ranked wins over No. 19 Central Michigan and No. 20 Arizona State. Out of the six duals the Cowboys had, five of the teams were ranked at the time of the dual. The pokes capped off their regular season with a bang having a very impressive showing at the Cowboy Challenge Tournament in Stillwater, Okla. Jacob Wright, Hayden Hastings, Tate Samuelson and Stephen Buchanan all took first place at the event with each wrestler beating a top 10 opponent in the finals. The Cowboys carried that momentum into the post season where they scored a program record 105.5 team points at the Big 12 Championships along with qualifying program record tying seven wrestlers for the national tournament.

Utah Valley
The two-time Big 12 champion Romero leads the way for UVU as he will enter his third trip to nationals as the highest seeded wrestler in program history by being seeded second at 174 pounds. Romero won his second Big 12 title just 10 days ago by going 4-0 at the conference tournament on his way to securing the automatic bid to nationals and remaining undefeated on the season with a perfect 16-0 record. He is UVU’s only Big 12 champion in program history and ranked third in the latest NCAA Coaches Panel Ranking and second on the latest InterMat poll (both of those rankings are the highest in program history).

UNI
Six Panther wrestlers head to St. Louis to take the mat at the NCAA Championship at the Enterprise Center. Big 12 champions Parker Keckeisen and Brody Teske lead the contingent for UNI. Keckeisen is the fourth seed and Teske is the fifth seed.

Keckeisen is 13-0 on the season with 5-0 record against wrestlers in the field. He opens the tournament against Iowa State’s Samuel Colbray. The two wrestled on Feb. 14 and Keckeisen picked up a 4-3 win over Colbray on his home mat in Hilton Coliseum.

Teske is 12-1 on the year with his only loss a 5-3 decision against Arizona State’s Brandon Courtney, the No. 3 seed in the tournament. Teske opens the weekend against Oregon State’s Brandon Kaylor who is 9-5 on the year. Six of Teske’s 12 wins were bonus-point victories, including two in the Big 12 Championship.

South Dakota State
Representing the Jackrabbits are automatic qualifiers Danny Vega (125 pounds), Zach Price (133 pounds) and Clay Carlson (141 pounds). Earning at-large selections to the 330-wrestler field were Cade DeVos (157 pounds) and Tanner Sloan (197 pounds). Sloan is the Jackrabbits’ lone repeat qualifier, but has not wrestled a match in the NCAA Championships due to the 2020 event scheduled for Minneapolis was canceled at the outset of the COVID-19 pandemic. This marks the ninth consecutive year SDSU has had at least one national qualifier.

Purdue
Devin Schroder is a 2020 NWCA First Team All-American, earning the No. 5 seed at the 2020 NCAA Championships.

Jacob Rundell (133 lbs) is the first Purdue true freshman to qualify for NCAA Championship since Christian Brunner in 2017.

Penn State
Penn State is sending fi ve freshmen and a sophomore to the NCAA tournament as part of its nine-man contingent.

Jared Franek and Brandon Metz are both making their second straight appearances, while senior Luke Weber carries a 12-match winning streak into his 1st NCAA appearance. Owen Pentz earned an at-large bid to become the first Bison true freshman to qualify for the NCAA Division 1 Championship.

NC State @PackWrestle
NC State qualified nine of its 10 starters for the 2021 NCAA Championships. The Pack received six top-10 seeds (a new school record) and R-Sr. Hayden Hidlay (157 pounds) and R-So. Trent Hidlay (184) are both seeded second in their weight class.The Hidlay brothers are the first set of brothers to receive top-two seed at the NCAAChampionships in the same season since the Stiebers of Ohio State (Logan and Hunter) did so in 2013. Both were one-seeds that year.This year marks only the second time in school history NC State had a pair of No. 2 seeds or better. Back in 2016, Nick Gwiazdowksi was No. 1 at 285 pounds and Tommy Gantt was No. 2 at 157 pounds both in their senior season.Over the last six seasons, NC State has qualified 53 of the possible 60 starters.

Navy
Nine members of the Navy wrestling team will begin their quest for a national title. This will be just the third time in school history that Navy has sent nine or more wrestlers to compete at the NCAA Wrestling Championship and the first since 1969. Eleven wrestlers represented Navy in 1968 (11 weight classes that year) and nine in 1969. Of note, the first time a qualifying method was used for the NCAA Championship was in 1971 with a regional tournament. A year later, regional qualifying was replaced with conference qualifier.

Michigan
The University of Michigan wrestling team will send eight individual wrestlers to St. Louis, Missouri, to compete in the 2021 NCAA Championships.

Michigan boasts three wrestlers seeded among the top five at their respective weights -- graduate student Myles Amine carries the top seed at 197 pounds, while junior Mason Parris owns the second seed at heavyweight and sixth-year senior Logan Massa is the fifth seed at 174 pounds. Amine, a three-time All-American at 174 pounds, captured the Big Ten title at 197 pounds two weeks ago, improving to 6-0 since making his delayed season start due to injury. Amine took an Olympic redshirt last season after qualifying for the Tokyo Olymic Games at 89kg for San Marino.

Minnesota
Nine Gophers have qualified for the 2021 NCAA Championships, the most since 2017 and eight of Minnesota's nine wrestlers are participating in their first national tournament.

Gable Steveson is the two-time Big Ten Champion and seeded first at heavyweight. He has won not lost since 2019 semifinals (29 wins in a row).

Little Rock
Out of Little Rock’s 12 duals this season, five were against ranked teams. In addition, out of all 120 bouts that the Trojans participated in during a dual, 34 of those were against top-25 ranked individuals, via FloWrestling.

Little Rock’s schedule was arguably the toughest in the Pac-12 conference in both amount and difficulty level: its 12 opponents are three more competitions than Oregon State’s nine and its five ranked opponents are two more ranked challenges than Arizona State and Cal Poly’s three.

Lehigh
After winning its fourth straight EIWA championship on Feb. 26, Lehigh qualified a full squad of 10 wrestlers for the 90th NCAA Championships at Enterprise Center in St. Louis. Lehigh crowned four individual champions and placed all 10 EIWA entrants in the top five of their respective weight classes. Leading the way for the Lehigh contingent is senior Jordan Wood, the No. 8 seed at 285, who recently won his fourth individual EIWA title. All four individual EIWA champions earned seeds in the top 17. Junior Jaret Lane is No. 14 at 125, freshman Malyke Hines is No. 17 at 133 and Jake Jakobsen is No. 16 at 197. Lehigh crowned three All-Americans (including Wood) at the last contested NCAA Tournament in 2019.

In 2018, Kyle Conel came into the tournament unranked and wrestled to a third-place finish at 197 pounds, Colin McCracken is the first 197 qualifier since Conel’s run in Cleveland.

Iowa State will be looking to crown its 300th All-American in school history at the 2021 NCAA Championships. The Cyclones’ 299 AA’s is the third most in NCAA history.

Iowa
Spencer Lee, Jaydin Eierman, Alex Marinelli and Michael Kemerer have an opportunity to become four-Ɵ me All-Americans in St. Louis. Lee and Marinelli have earned All-America honors in each of the last three years. Kemerer missed 2019 with an injury but earned honors in 2017, 2018 and 2020. Eierman reached the medal stand for Missouri from 2017-19. There have been 20 four-time All-Americans in the history of Iowa Wrestling. Joe Scarpello was Iowa’s first four timer. He won the NCAA title in 1950 to earn his fourth All-America honor.

Each of the five NCAA qualifiers for the Illini are nationally ranked in the top 25 across multiple ranking websites, with their highest respective rankings as follows: Lucas Byrd (No. 7), Dylan Duncan (No. 16), Danny Braungel (No. 9), Zac Braunagel (No. 17), and Luke Luffman (No. 15).

Gardner Webb
Mosley enters the 2021 NCAA Cham-pionships as the No. 28 seed in the 165-pound weight class bracket. The redshirt-sophopmore will face No. 5 Zach Hartman of Bucknell on Thursday morning.

Anderson enters the 2021 NCAA Championships as the No. 32 seed in the 184-pound weight class bracket, facing Sacred Heart’s Joe Accousti Thursday morning with the winner taking on The No. 1 seed, Aaron Brooks of Penn State

Fresno State
Fresno State Wrestling will have two wrestlers in the 2021 NCAA Championships with redshirt senior DJ Lloren being the No. 13 seed at 141 lbs. & redshirt freshman Kyle Parco earning the No. 17 seed at 149 lbs.

CSU Bakersfield
Bakersfield is sending at least one wrestler to the NCAA Championship for the 48th consecutive season, dating back to heavyweight Bill Van Worth’s qualification in 1974. The `Runners have sent multiple qualifiers in all but four of those seasons, including as many as nine in 1996.

Only eight programs have sent more alumni to all-time Olympic and World Championship competition, than Bakersfield’s 17.

Chattanooga
UTC posted an 8-4 dual match record under third-year head coach Kyle Ruschell. The Mocs were third in the Southern Conference regular season, with both losses going down to the final match. UTC also finished third at the SoCon Tournament in Boone, N.C., on Feb. 28.

Truax, a redshirt sophomore, claimed the Pac-12 title at 174 pounds nearly three weeks ago in Corvallis, Oregon, and will bring a 41-19 overall mark to the nationals. A redshirt freshman, Lamer claimed second place at 149 pounds in the Pac-12 finals and is 23-6 in his Mustang career.

Buffalo
Michael Petite earned true fourth at the MAC Championship to punch his ticket. He is a first-time NCAA qualifier.

Bucknell
Zach Hartman and Darren Miller are set to represent Bucknell at the 2021 NCAA Wrestling Championships this week.

Hartman, a junior, is a three-time qualifier while Miller, a sophomore, will make his first appearance at the NCAA Championships.

Binghamton
Lou DePrez (184) is ranked 3rd in the nation and is seeded 3rd at the 2021 NCAA Championships.

Roes is the third true freshman in program history to qualify for NCAA Championships.

During the regular season, App State went 7-2 in duals, taking four of 10 matches in a 24-12 loss to seventh-ranked ACC tournament champion NC State and building a 17-3 lead in a 21-17 loss to Campbell.

American
Redshirt senior Gage Curry (125 pounds) and redshirt sophomore Tim Fitzpatrick (174 pounds) will both be competing. Curry has now qualified in four straight years, while Fitz-patrick has done so for the first time.