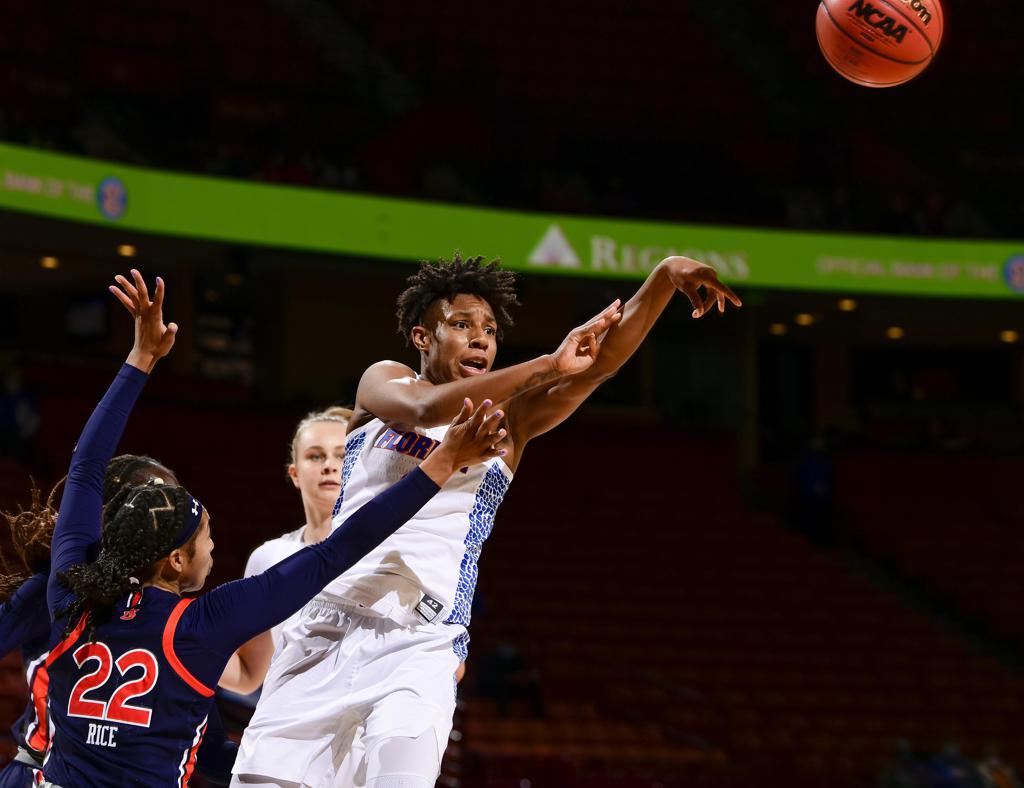 Thompson finishes her senior season with 1,540 points and 1,156 rebounds; she’s the 12th-leading scorer in Auburn history and the all-time leader in rebounds, rebounding average (10.6) and double-doubles. She is also 10th in career field goals made (605) and eighth in career free throws (329).

Florida senior guard Kiki Smith led the way again for the Gators with 19 points, five rebounds and four assists, pacing the team in scoring for the 11th time this season. The standout scored her 1,000th career point with a tear-drop floater with 9:42 left in the fourth quarter, becoming just the 26th player in program history to eclipse the 1,000-point mark. 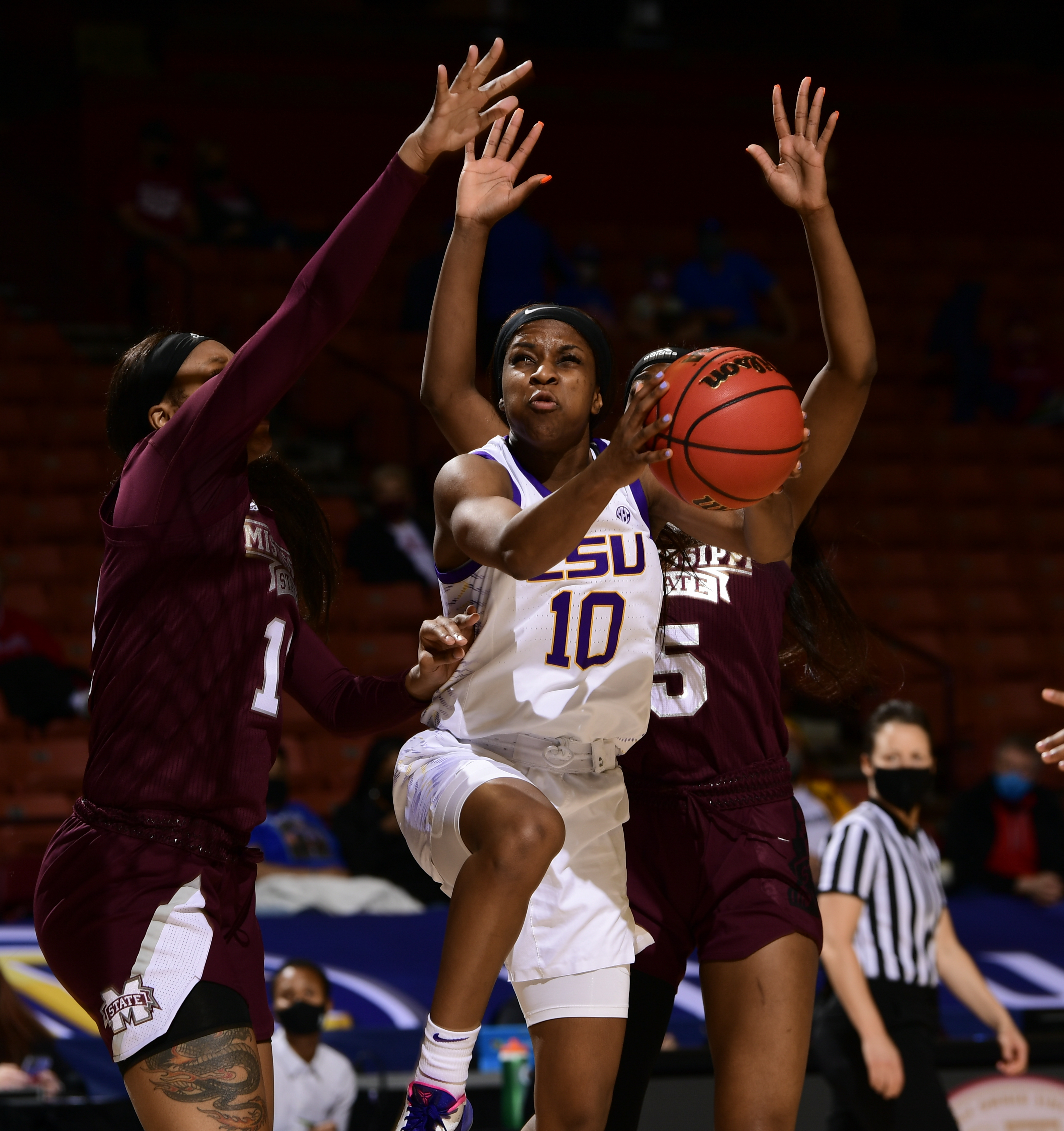 Junior transfer Ryann Payne led LSU in scoring as she set career-highs in points, rebounds and assists. She finished with 17 points and added four rebounds and three assists for the game. She and junior Sarah Shematsi came off the bench for a combined 30 points, a huge factor in the victory. Shematsi hit four key three-point shots in the game and finished with 13 points. 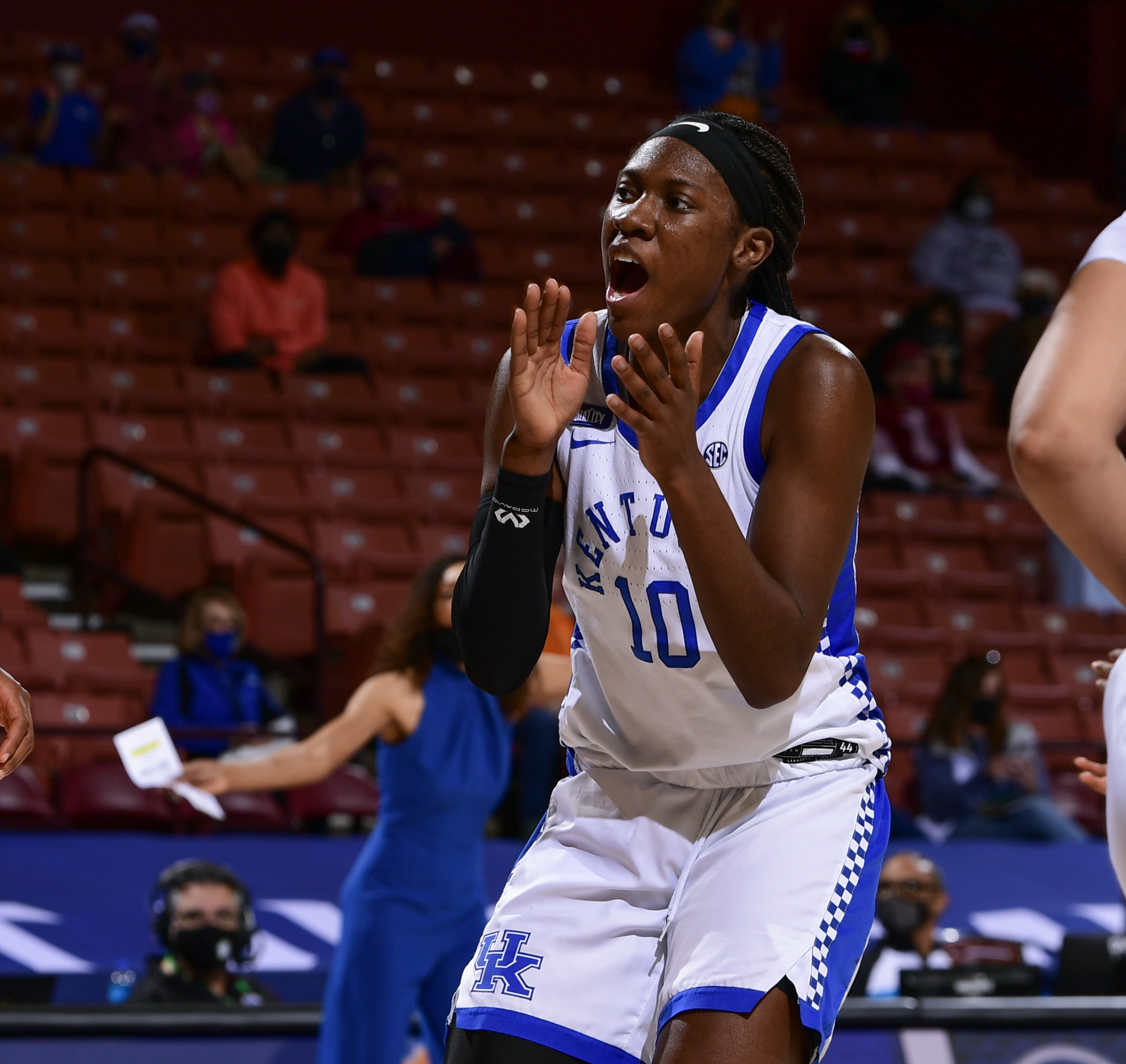 Despite a career-best 36 points from senior guard Kiki Smith, the University of Florida women's basketball team dropped a hard-fought 73-64 decision to the fifth-seeded Kentucky Wildcats in the SEC Tournament's second round of play Thursday inside of Bon Secours Wellness Arena.

Kentucky's Rhyne Howard scored 27 points, grabbed six rebounds and dished out four assists and senior KeKe McKinney had 10 points, eight rebounds and two assists for the Cats, while freshman Treasure Hunt had one of her best games of the season with nine points, seven rebounds and four assists. 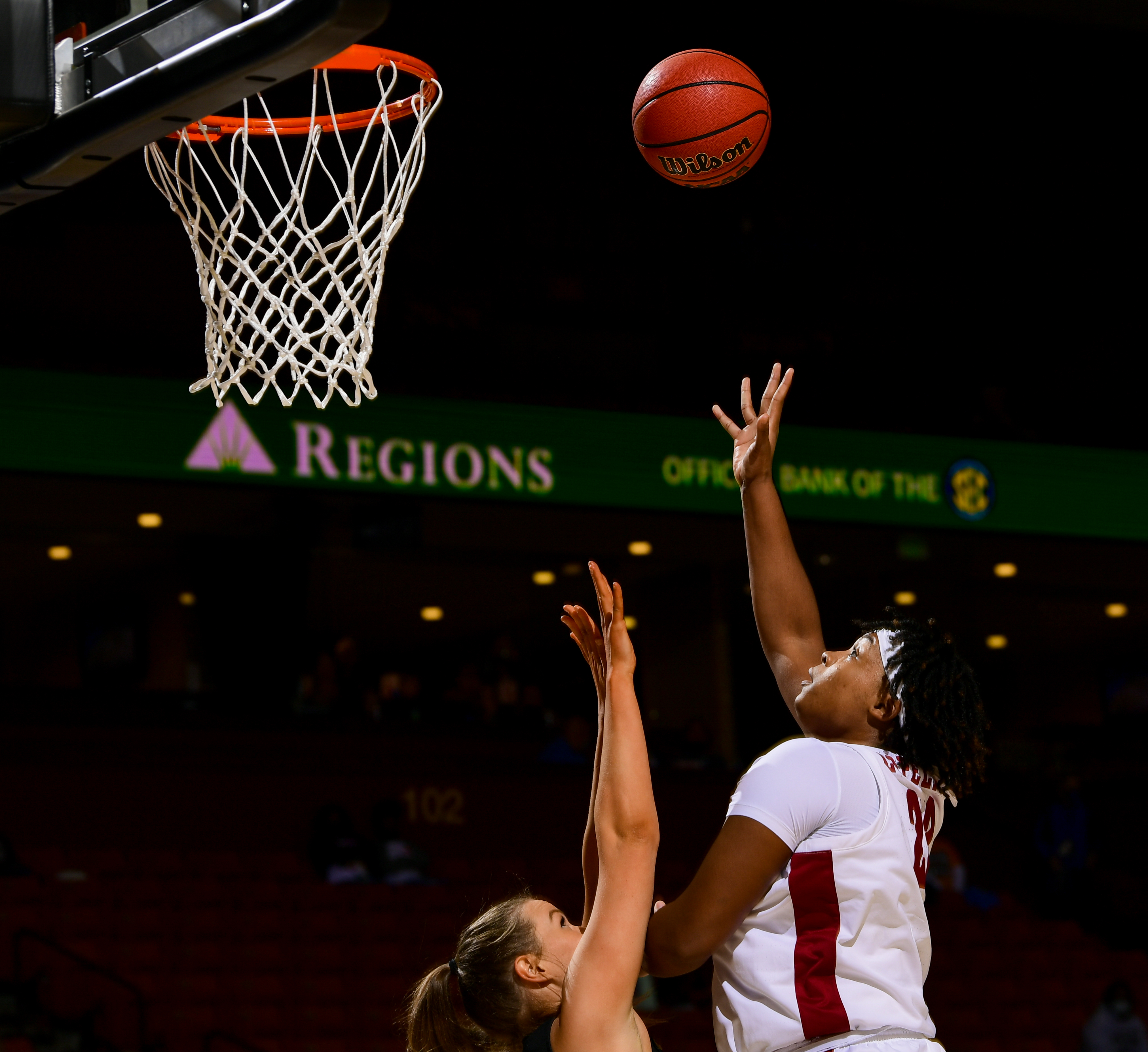 Ariyah Copeland scored 22 points and grabbed 10 rebounds on Thursday night and seventh-seeded Alabama turned back 10th-seeded Missouri 82-74 in the second round of the Southeastern Conference tournament.

Aijha Blackwell had a career-high 28 points and grabbed 12 rebounds for Missouri and Shug Dickson scored 12 points. Blackwell had four 3-pointers and five teammates had two each. 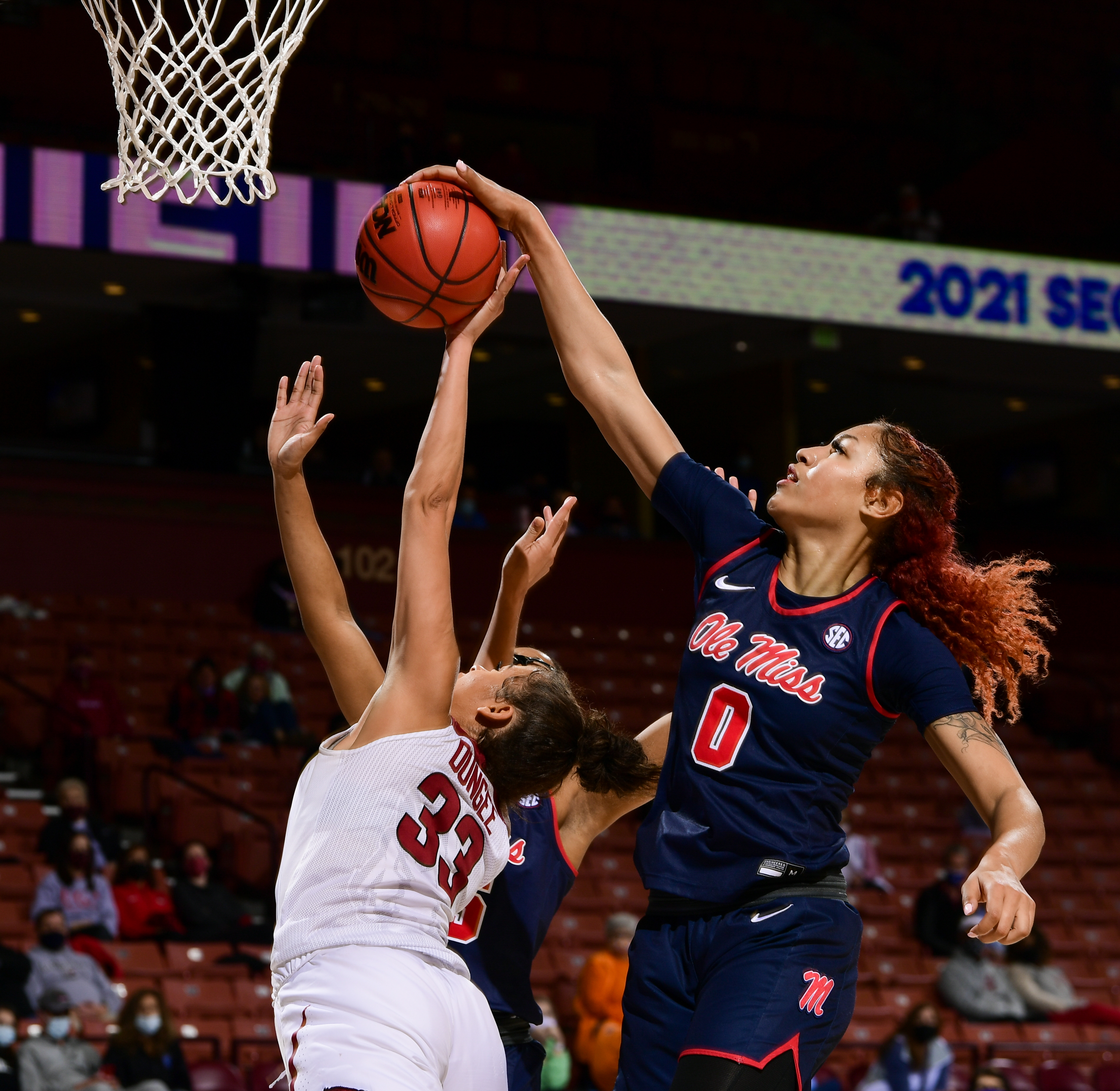 Arkansas entered the tournament as the SEC's leading scoring offense and the sixth-highest scoring offense in the NCAA, averaging 84 points per game, but the Rebels stifled the Razorbacks, holding them to 32.4% shooting and 7-for-31 from 3-point distance. 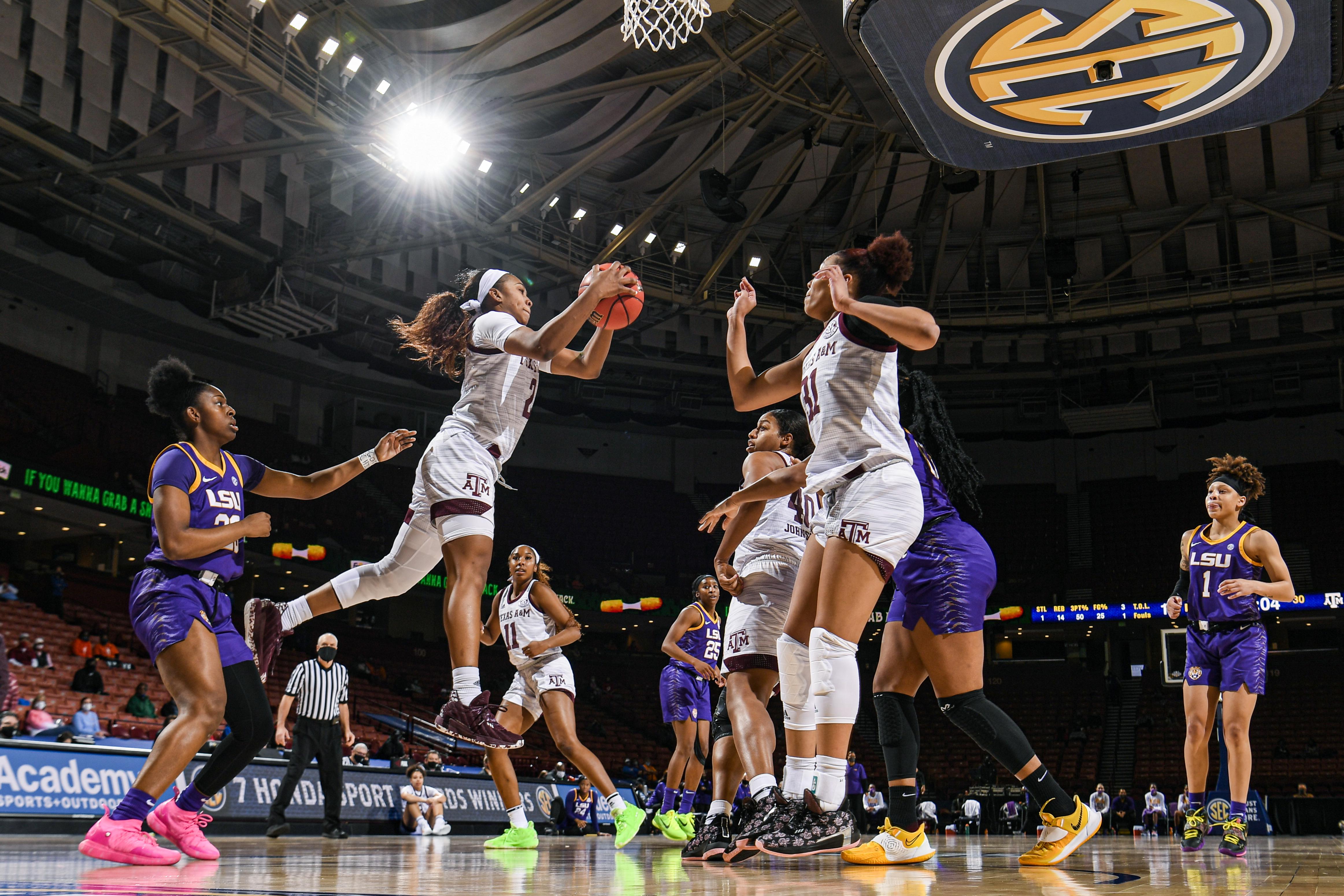 The Maroon & White dominated LSU down low in every statistical category, highlighted by a 40-14 margin with points in the paint and the Aggies rebounding was once again a calling card for A&M, as the Aggies solidified a 44-34 advantage on the glass.

A&M Aaliyah Wilson set a new career high in rebounds with 15, recording double-digit boards for the third time this season and the third time in her career. 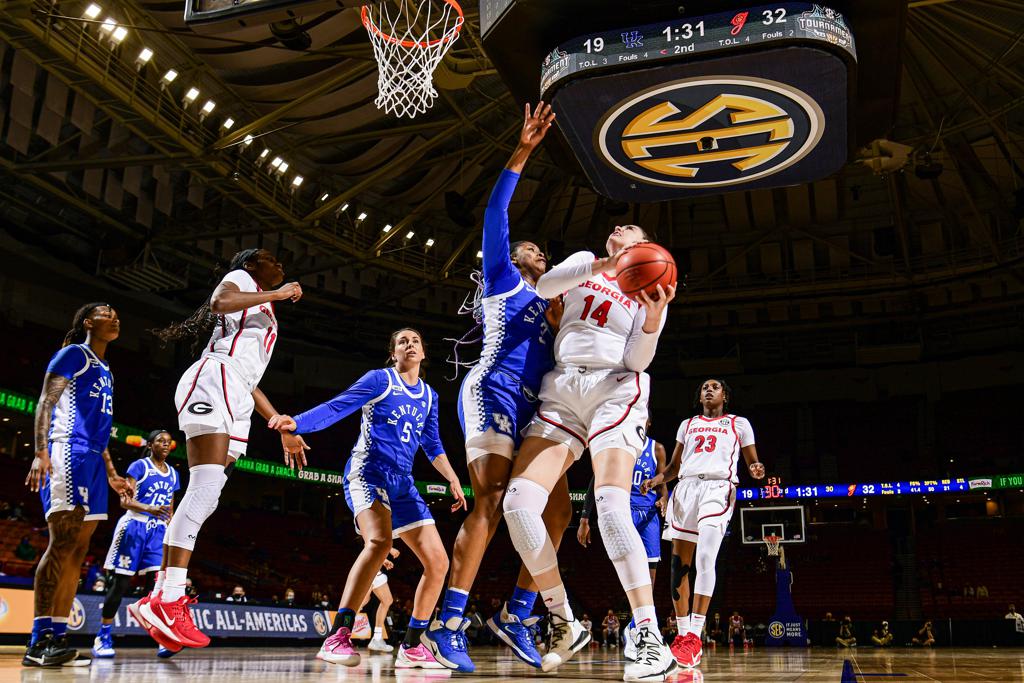 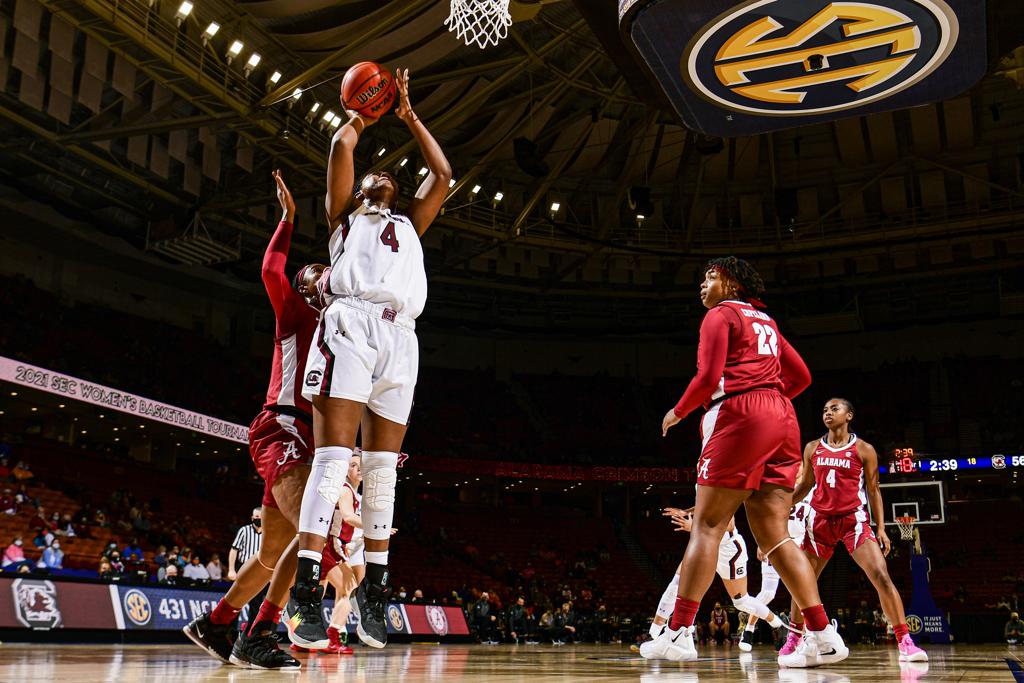 Gamecocks' Cooke finished with 22 points on 9-17 shooting, while Henderson had 18 on 7-10 shooting and went 3-3 from three. But Boston was the centerpiece. She scored 16 points, grabbed 13 rebounds, and had three steals.

No. 3 seed Tennessee (16-6) was led by senior Rennia Davis, who turned in a career-high-tying 33 points and added 14 rebounds to record her sixth-straight game with 20+ points and her ninth double-double of the season. Junior Rae Burrell was also in double digits with 18 points and seven rebounds, and sophomore Jordan Horston had a solid outing with 12 points, seven rebounds and five assists.

Top scorers for Ole Miss (11-11), the No. 11 seed that had already ousted sixth-seeded #13/13 Arkansas on Thursday, were Donnetta Johnson with 20 points, Shakira Austin with 14, and Jacorriah Bracey with 13.

Jordan Nixon finished with 14 points on 6-for-10 shooting in 26 minutes of play. She reached double-digit points for the 11th time this season and 12th time in her career and has scored in double figures in each of the last six games.

Georgia's Staiti registered a double-double of 13 points and 12 rebounds, scoring in double digits for the 29th time in her last 34 games and posting her 13th double-double.

Game 11: #2 South Carolina vs. #3 Tennessee, 67-52
South Carolina (21-4) was paced by Zia Cooke, who had a game-high 17 points and four rebounds. Aliyah Boston was close behind, posting a double-double with 15 points and 11 rebounds, and Destanni Henderson put up 13 points.

Redshirt-junior Jordan Walker and sophomore Jordan Horston were the high scorers for UT (16-7), each finishing with 11 points. Senior Rennia Davis and sophomore Tamari Key were the top rebounders for the Big Orange, grabbing six apiece.

Morrison had 20 points to lead Georgia.