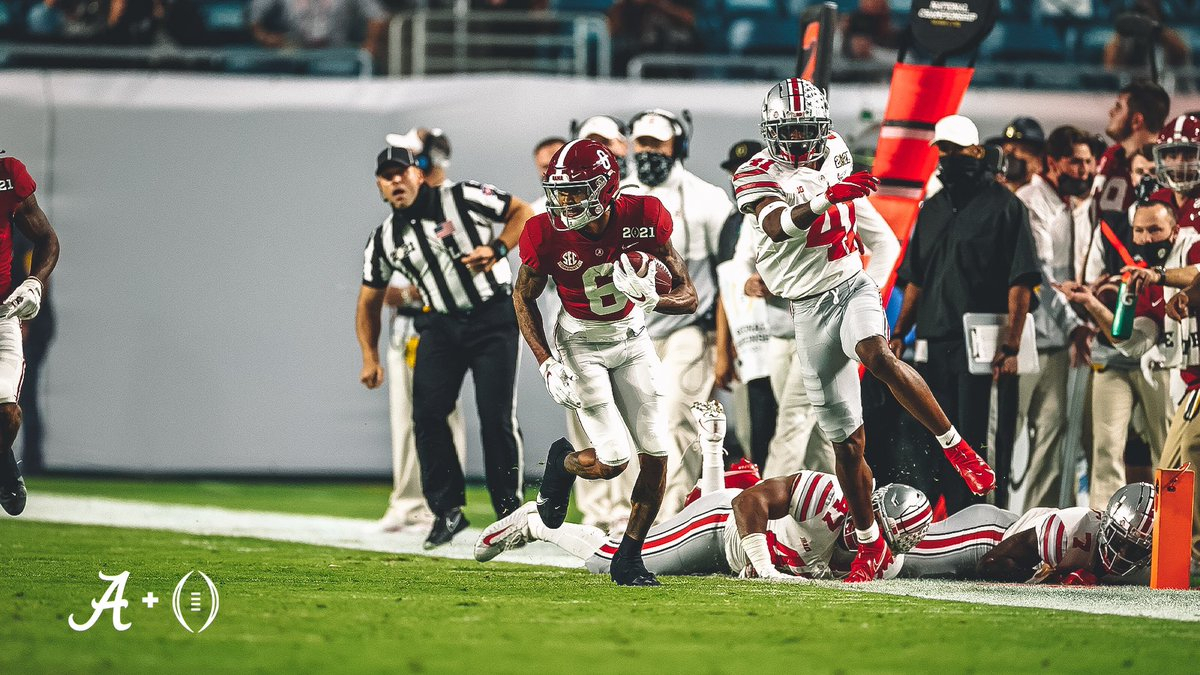 The top-ranked Tide (13-0) scored a dominant victory over  No. 3 Ohio State (7-1), beating the Buckeyes 52-24 for Nick Saban's seventh national title and sixth at Alabama.

First Possession Score: Alabama joined Oregon in the first CFP title game as the only teams to score on their first possession (Oregon also scored a TD, against Ohio State in the 2015 game at Arlington: Marcus Mariota 7 pass to Keanon Lowe; tonight: Najee Harris 1 run on fourth down). --Alabama mixed it up on the drive (8 passes, not hurried on any, 4 rushes, completing passes to five different receivers).

Ohio State: couldn’t pressure UA QB Jones on his first 15 pass attempts; when it got through, Baron Browning recorded a stripsack, leading to the tying touchdown. It was Alabama’s 12th turnover of the season (never more than one in a game, and the Tide did not have one against Notre Dame in the semifinal).

The 35 points by Alabama are the most scored in the first half of a Championship Game. The old record was 31 by Clemson vs. Alabama in the Bay Area on Jan. 7, 2019.

Alabama WR DeVonta Jones set new Championship Game record for receptions in the first half alone, catching 12 passes for 215 yards and three touchdowns. Eight of his catches resulted in first downs and three were touchdowns. The old receptions record was 10 by Hunter Renfrow of Clemson vs. Alabama in Tampa on Jan. 9, 2017.

Alabama WR DeVonta Jones has set a new Championship Game record for most receiving yards in a half of the national championship game with 215. The previous record was 183 by OJ Howard of Alabama vs. Clemson in Arizona on Jan. 11, 2016.

Alabama QB Mac Jones set a new Championship Game record for passing yards in a half with 319. The old record was 291 by Jake Coker of Alabama vs. Clemson in the second half in Arizona on Jan. 11, 2016.

Alabama QB Mac Jones set a new Championship Game record with 12 consecutive completions beginning with 1:21 remaining in the first quarter until 5:21 was left in the second quarter. He threw for 136 yards and two touchdowns during the streak of completions. The previous record for consecutive completions was 8, set by LSU’S Joe Burrow vs. Clemson in New Orleans on Jan. 13, 2020.

Fields finished the season with a .702 completion percentage, the highest in Ohio State single‐ season history. Dwayne Haskins previously held the mark of .700 in 2018.

The Buckeyes were appearing in their fifth national championship game of the BCS/Playoff era. Their previous appearances came following the 2002, 2006, 2007 and 2014 seasons.