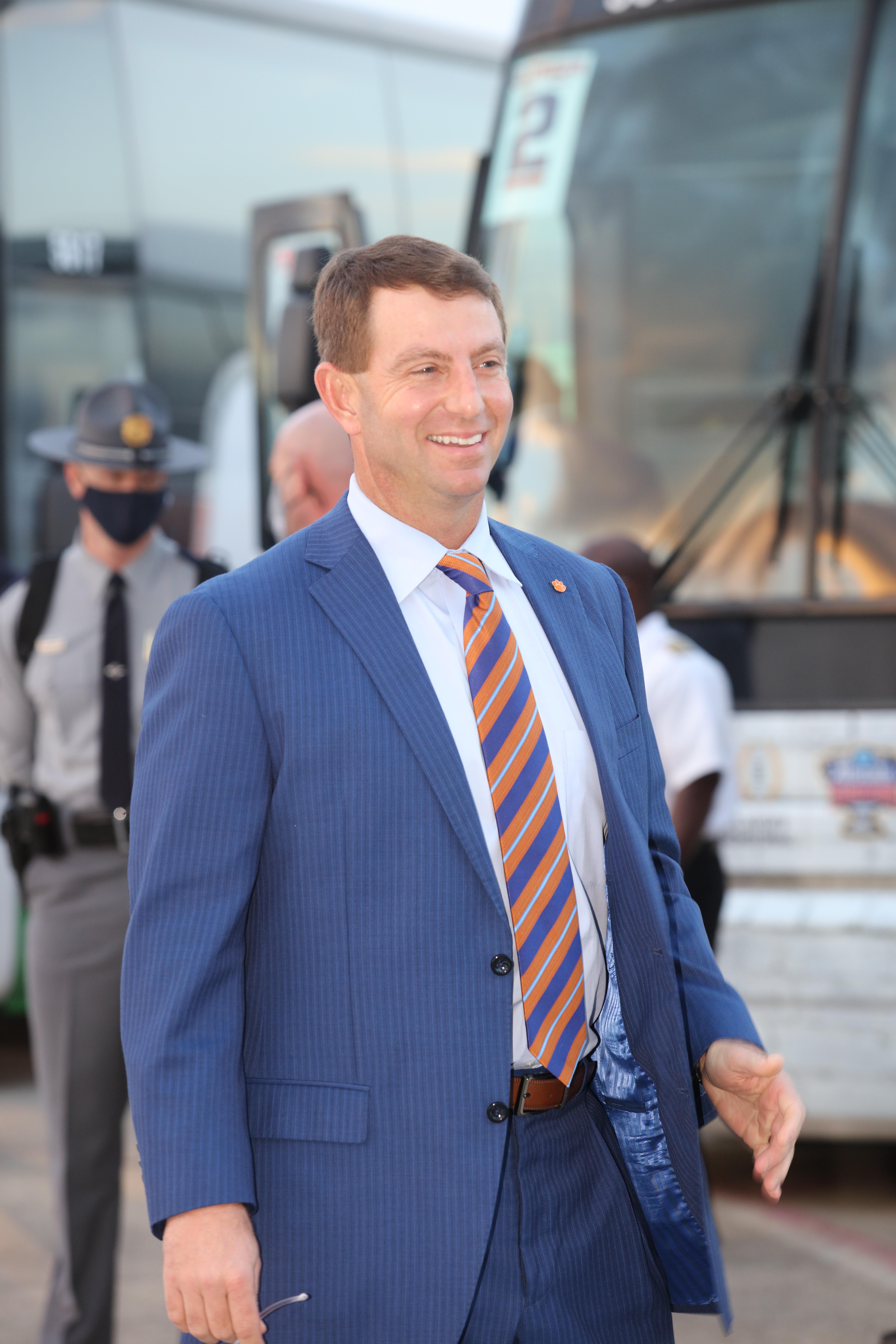 World Exposure Report @CoachDWoods: Dabo, if you guys are able to win the national championship, do you think this kind of puts Trevor Lawrence as the best quarterback that's ever played a college game?

Q. It seems like you both sort of painted -- I think you probably do this to motivate your teams a little bit, or give your teams sort of a vision of a goal of this is sort of an "unfinished" type of game, both with Clemson losing in the Sugar Bowl last year, and obviously Ohio State losing to Clemson. Wonder if you can sort of talk a little bit about how that was used to sort of motivate the teams, or give the teams a vision of a goal to pursue as you're going into this game?

COACH SWINNEY: We're motivated by winning just as much as we are losing. We've won a national championship. That's pretty motivating. You want to go do it again. And as you mentioned, we lost right here last year, and that's pretty motivating, too. So I think that every year you start over, and the goal is to be the best you can be. Our goals are laid out and pretty simple, but allow us to compete at the highest level, and everything goes to winning our league. That's where it starts. We're always motivated to be our best, and certainly we learn from our memories. As I always say, we just try to keep our dreams greater than our memories. Whether you had a tough loss or had a big, big win last year to finish your season, season is going to end one way or the other. You either win it all if you are in a playoff like this, or you get beat -- or you're in a bowl game and you win that bowl game, and you have momentum and excitement going in your off-season, whatever it is. I think all those things provide motivation. That's it.

COACH DAY: I think after last year's game, it was fresh in our mind and something that was used as motivation. And then as the quarantine kind of hit, there just seemed to be more things that were front and center for a long period of time. And then as the season went on and we were able to get the season going again, all those goals were right front and center for us. Obviously, our number one goal every year is to be the school up north and then win the conference and then win the championship. I think the biggest thing for us is just having an opportunity to tell a great story of all the adversity that this group has overcome. That's really, at the end of the day, what we focus on because this is an amazing group -- what they've overcome, what they've gone through. Just like a lot of schools, everyone has had their own adversity they've gone through during the season, which has made this such an amazing year and inspiring for so many people. I think for us, the highest motivating thing with that is just the fact that we'll have something to show for it in the end and be able to tell a great story of overcoming so much.

Q.: Ryan, you've been shorthanded against Michigan State and obviously against Northwestern. I know the status report won't come out until tomorrow. But can you give a general assessment of how close to full strength you'll be?

COACH DAY: "Full strength" is a floating target right now because there's guys who come off of the isolation, and then they have a protocol to get back on to the field. You don't just play football after not doing anything for ten days. And so I think there's certain levels of return-to-play. And all those guys who were missing there for the last month are working their way back into it. So we are getting a lot of guys back. But to say 100%, it's different this year. But the good news is they are working their way back and getting stronger every day.

Q. Dabo, I know we won't get that full report until tomorrow, but are you close to full strength? Is there anybody of note that maybe didn't make the trip, other than Coach [Tony] Elliott?

COACH SWINNEY: I think everybody is here except I think we had two guys that didn't make the trip; one walk-on and one scholarship player that are just unavailable. But everybody else is here, even our injured guys and things like that.

Q. Dabo, you have talked a lot about how proud you are of your guys this year for all the challenges that they've had to overcome in getting to this point. But I know you to be somebody who thrives from personal interaction, which has certainly been limited this year. You make your calendar out a year in advance, which doesn't, I'm sure, work well in a year like this. And certainly you've probably gotten more criticism this year than most years. How challenging has this year been for you? And what have you learned from or how have you grown the same way that your players might have from some of these challenges you've had to overcome, right up to Coach [Tony] Elliott being out for this important game?

COACH SWINNEY: Everybody has had to adapt. It's been a great year. I mean, it's been challenging for sure. But I always say "God never says oops." That's how I look at it. There are certain things we go through that we don't like. That's how you grow. That's how we get better. In a lot of weird ways, as challenging as it's been within our world and what we do, it's also been a blessing. It really has. I mean, it's just kind of been us. It's just been us. And this group has been amazing to be with every single day. I'm thankful that we have the type of culture here. That's been awesome to see. It's not an accident that we're here. These guys are great, young people, first and foremost, and we've got a bunch of great leaders. We have a wonderful staff. And it's just been very different. We've had to make a million adjustments in the protocols, how you meet, how you eat, how you travel, how you practice -- you name it -- things you would have never thought of before, but we've made it work. You go to games, and some games there's nobody there. Some games there's a few people there. But we found a way to still have joy in the journey. I love that. So these guys have been great. And seeing guys step up, I mean, we started more guys this year than at any time ever. We've had all kind of guys out here, there, even dealing with coaches out. And everybody just continues to step up.  But for me, it's been a great year in a lot of ways, challenging. But again, we all grow through challenges. Learned a lot. Learned Zoom. Never heard of that before (laughter). Learned a lot of new technology. So, you know, that's something that's probably going to carry forward with us forever. Recruiting was very, very different. We've got a couple of guys moving to campus on Sunday that I've never met, like, in person. So it's been unique. We've had to kind of learn our way a little bit. It's all good. It's all good.