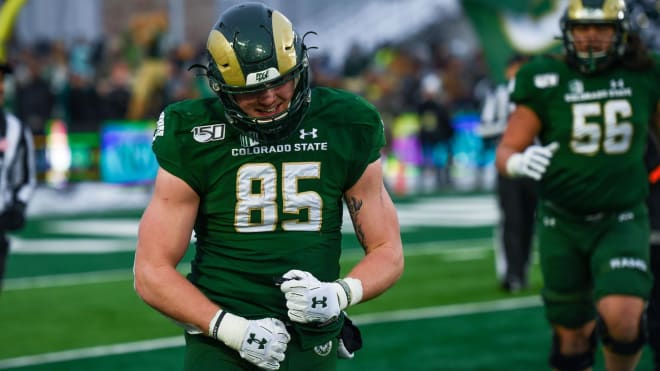 Tight end Trey McBride has reportedly entered the NCAA’s transfer portal, making it likely that Colorado State’s football team will be without its top two NFL prospects once the Rams are able to play again after star receiver Warren Jackson also announced over the weekend that he will forego his senior season to prepare for the NFL draft.

McBride has two years of eligibility remaining after establishing himself as a legitimate pro prospect last season while catching 45 passes for 560 yards and four touchdowns. The 6-foot-4, 260-pounder from Fort Morgan earned first-team All-Mountain West honors following the season.

A CSU athletic department spokesman was unable to confirm or deny the reports about McBride entering the transfer portal.

CSU’s fall football season was canceled by a vote of university presidents from the 12 Mountain West schools but officials are working on plans to play a spring season.

The Mountain West, along with the Big Ten, Pacific-12 and Mid-American conferences and most Football Championship Subdivision and NCAA Divisions II and III conferences also postponed their fall seasons.

The American Athletic, Atlantic Coast, Big 12, Southeastern, Sun Belt conferences and Conference USA are still planning to play a fall season, and it’s possible McBride is hoping to transfer to a school in one of those conferences and play right away.

CSU suspended all football activity, including offseason workouts, on  Aug. 7 following allegations of racism and verbal abuse in the program.

An outside investigation started by CSU President Joyce McConnell that had been tasked with looking into claims the football program was violating the university’s COVID-19 testing protocols has now been expanded to include the racism and verbal abuse concerns.