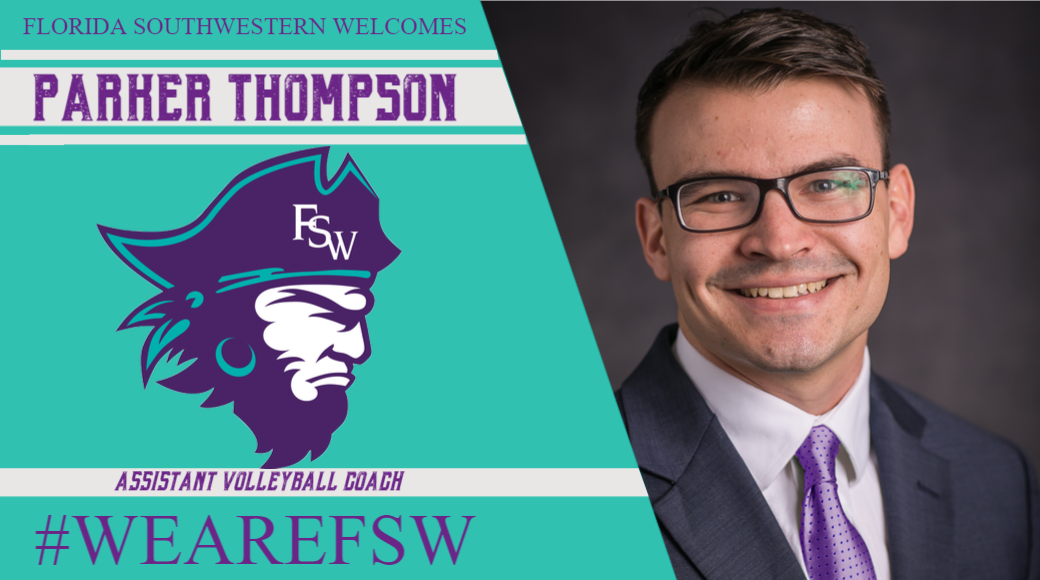 Florida SouthWestern State Head Volleyball Coach Thais Baziquetto-Allen  has rounded out her coaching staff for the upcoming season by announcing the hiring of Parker Thompson as an Assistant Coach.

It is a reunion of sorts for Baziquetto-Allen and Thompson who coached together at Seward County in the Spring of 2018.  Thompson comes to Fort Myers after two highly successful years with the Lady Saints where he helped lead them to a pair of top five finishes at the NJCAA National Tournament, including an appearance in the National Championship game in 2019.  In his two seasons at Seward, the Lady Saints went 63-10 overall and continued a streak, started by Baziquetto-Allen, of three straight undefeated conference schedules, going 32-0 and capturing a pair of Jayhawk West and Region VI Championships.  While with the Lady Saints, Thompson coached three First Team NJCAA All-Americans including Luz Sierra, Laura de Pra, and Yanlis Feliz.

Prior to his time at Seward, Thompson worked with NCAA Division I powerhouse Penn State where he watched as the Nittany Lions went to three straight NCAA Tournaments including a trip to the Final Four his final year in 2017.

Thompson also played for the Penn State Men’s Volleyball team where he suited up as a libero, helping the Nittany Lions to a Final Four during his freshman season.

He will join the Buccaneers for their second season of competition in 2020.  In their inaugural campaign, FSW burst onto the scene, going 16-8 overall and making an appearance in the FCSAA State Tournament where they won a pair of games to finish fourth behind three eventual NJCAA National Tournament competitors who all finished in the top six nationally.

FSW returns seven players to the fold in 2020 including All-Conference performers in Julia de Sa, Amanda Mendes, and Viktoria Ivanova.

The Bucs are slated to begin their season on August 21st at home in the FSW Kickoff Classic at Suncoast Credit Union Arena.