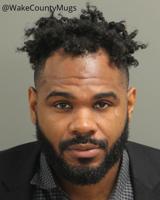 A former UNC football player was arrested after a parcel containing marijuana and edible THC was discovered to a Raleigh home, according to a release from the Wake County Sheriff’s Office.

The street value of the drugs confiscated is $160,000, the release said.

Hawkins also has charges in Georgia for a probation violation for possession with intent to distribute cocaine, according to the Wake County Sheriff’s Office.

Hawkins was a former football player for the University of North Carolina and Marshall University in West Virginia.

He was previously charged in 2015 and again in 2019 for violations of the state’s Uniform Athlete Agent Act, a version of which is enacted in more than 40 states. It bars agents and their representatives from providing gifts to college athletes to entice them to sign representation contracts that would jeopardize their college eligibility.

In July 2014, Special Agent A.H. Jones outlined key points from a long-running investigation in a request for a search warrant for access to Hawins’ Instagram account under the user name “thaincrediblehawk.”

In one example submitted in the search warrant application, Jones cited an Instagram message to Jabari Price, the UNC back who now plays with the Minnesota Vikings but was still considered college eligible at the time of the social media contact.

“Season over... Can we talk about representation” was what Hawkins sent, investigators say.

Hawkins was originally charged in 2015 with providing $13,700 to former UNC football player Robert Quinn and also helping Quinn sell game-worn equipment worth another $1,700.

Hawkins is due in Orange County Superior Court in those cases Feb. 24.

It’s unclear whether Hawkins had an attorney who could comment on his behalf.